Cotton root rot, caused by the fungus Phymatotrichum omnivorum, also is known by several other names such as Phymatotrichum root rot, Texas root rot and Ozonium root rot. It is one of the most destructive plant diseases and attacks more than 2,000 species. However, either the fungus infects but does not kill monocotyledonous plants (grasses, etc.), or these plants are all highly resistant. In Texas, the disease is economically important in cotton, alfalfa, ornamental plants, and fruit, nut and shade trees. The fungus is prevalent in calcareous clay loam soils with a pH range of 7.0 to 8.5 and in areas with high summer temperatures. Therefore, the disease is limited to the southwestern United States.

Phymatotrichum root rot has been reported in Texas counties from the Red River to the Rio Grande and from Tom Green County to the Neches River.

Disease symptoms are most likely to occur from June through September when soil temperatures reach 28oC (82oF). The first symptoms are slight yellowing or bronzing of leaves followed by wilting. Plants die suddenly after the first symptoms of wilting. Leaves remain firmly attached to the plant. Affected plants die suddenly, often after excellent growth. Large trees and shrubs may die more slowly.

Usually roots are invaded extensively by the fungus by the time plants have wilted. When roots are pulled from the soil, root bark is decayed and brownish, and wooly strands of the fungus frequently are apparent on the root surface. Affected plants pull from the soil with little effort.

Under moist conditions, sporemats sometimes appear on the soil surface. These mats, 2 to 16 inches in diameter, are first snow-white and cottony and later tan and powdery. On large roots and tubers, there are numerous small, cushion-like sclerotia or resting bodies about the size of a pinhead. At first they are light tan, but later appear dark and warty.

The fungus generally invades new areas by continually slow growth through the soil from plant to plant. Occasionally, it spreads more rapidly on the roots of infected transplanted plants. The fungus can survive in the soil for many years, and often it is found as deep in the soil as roots penetrate. Affected areas often appear as circular areas of dead plants in fields of infected crops. These areas gradually enlarge in subsequent years as the fungus grows through the soil from plant to plant. Infested areas as may increase 5 to 30 feet per year.

Phymatotrichum omnivorum exists in the soil in three distinct forms: (1) hyphae and strands (rhizomorphs), (2) sclerotia and (3) sporemats and conidia.

Hyphae and strands. The fungus produces root-like strands (rhizomorphs) that grow through the soil until they contact the descending plant roots. Strands surround a root and grow toward the soil surface. Immediately below the surface, the fungus proliferates around the hypocotyl, producing a cottony, mycelial growth. Below this mycelium, the bark is destroyed, and the fungus fills the vascular tissue of the plant. Following death of the plant, sclerotia form in the strands.

Sclerotia. Strand cells divide, grow and enlarge to form sclerotia. These sclerotia are small (1 to 2 millimeters in diameter), densely compacted masses of thick-walled cells. Sclerotia are first white, changing to buff, brown and black with age. They are irregular shaped, generally taking the shape of the soil space where they are formed. Sclerotia enable the fungus to persist in fallow soil or soil planted to resistant crops for several years. Sclerotia have been found as deep as 12 feet in some soils.

Sporemats and conidia. The fungus often forms sporemats on the soil surface during warm, rainy weather. These mats vary from 2 to 16 inches in diameter and are white to tan colored. They are composed of large-celled, branched fungal strands that later produce conidia. The conidia appear sterile, and their role in the spread of the pathogen has not been documented.

Phymatotrichum root rot is one of the most difficult plant diseases to control. Fungal behavior in different crops and soils and its activity from year to year in the same field are so erratic that it is ineffective to rely on one approach. Use a control program consisting of a systematic course of treatment involving several recognized control methods.

Organic amendments. Significant control of Phymatotrichum root rot has been achieved by using various crops as organic matter amendments. A delay in infection is readily apparent and has resulted in 90 percent reduction in root rot. Wheat, oats and other cereal crops are effective in delaying infection and reducing losses when incorporated in soil in the spring.

Plant barriers. This technique consists of planting resistant species around an infected area. These barriers either exclude or limit the spread of the pathogen. This technique assumes that the barrier plant does not harbor the pathogen in its root system. Make ornamental plantings of cotton root rot-susceptible species with isolated plants or groups of plants rather than in continuous rows as hedges. When the disease occurs in an ornamental planting, replace diseased plants with resistant species.

Fertilizer applications. To reduce root rot, apply fertilizers high in certain nitrogen forms. When nitrogen is applied as ammonia in a manner to fumigate as much soil as possible, research shows a reduced incidence of root rot.

In some cases, valuable ornamental plants and orchard trees have been treated successfully even after root rot infection has taken place. First prune the tree (or shrub) back and build a circular ridge (equal in diameter to the top of the plant) of soil some distance from the trunk. Work 1 pound of ammonium sulfate into the soil for each 100 square feet of surface within this ridge. Fill the area within the ridge with water to a depth of about 4 inches. Repeat the treatment and watering after 5 to 10 days. Do not apply more than two treatments in the same season.

Following this treatment, water frequently to prevent drought injury. Acidifying the soil with sulfur around susceptible trees or shrubs may help delay or prevent root rot infection in areas where the disease is prevalent.

Resistant varieties. Development of resistant plants using conventional breeding concepts, has been difficult due to the pathogen's wide host range. However, the
following list of woody and herbaceous plants has shown resistance or tolerance to cotton root rot and should be considered by the homeowner where the disease is prevalent. The hardiness zone is given for each woody plant listed. Check the map to determine the zone in which you wish to use the plant. Use any plant with that zone number or a lower number. Plants with a higher zone number usually will not be hardy in that area. Check the list for size and foliage type to aid you in selecting the plants best suited for your particular purpose. 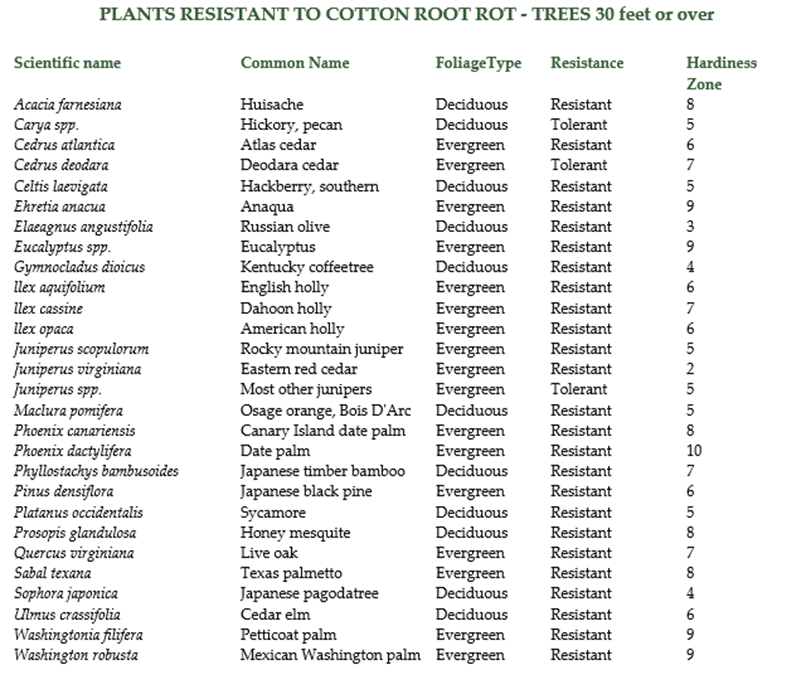 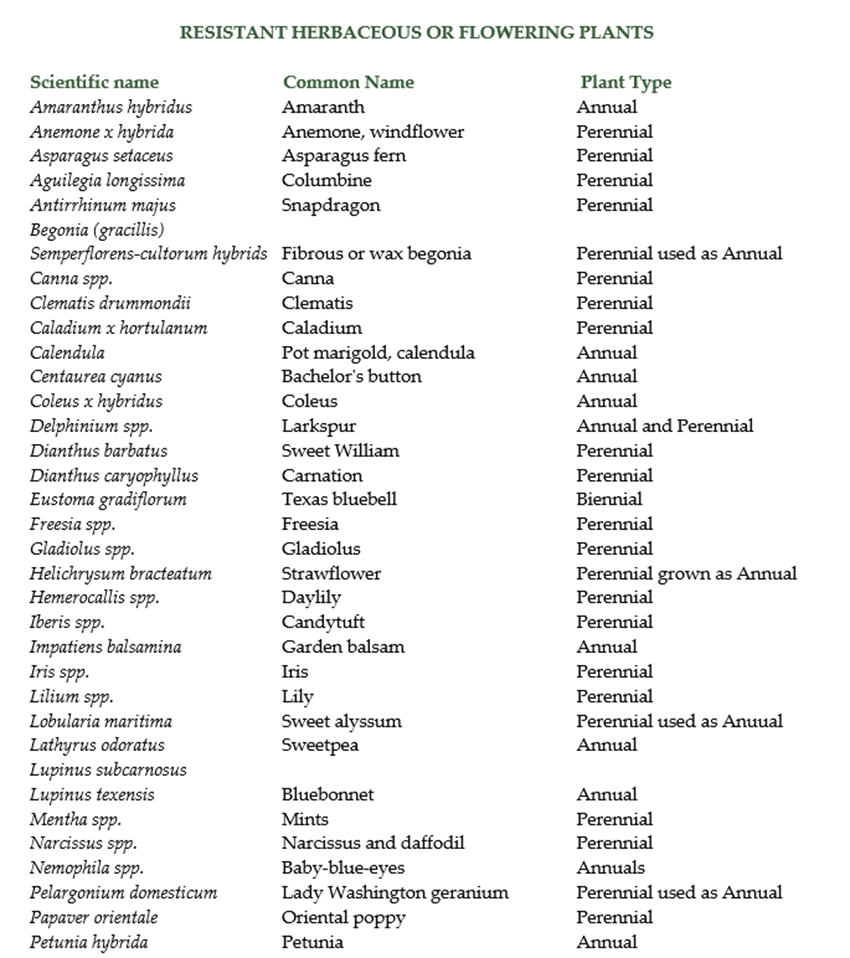 Based on the work of J.J. Taubenhaus and W.N. Ezekiel as well as the work of H. E. Smith in L-390 Cotton Root Rot. http://aggie-horticulture.tamu.edu/plantanswers/publications/cottonrootrot/cotton.html Hypertext markup and graphic design by Dan Lineberger and Christine MacAlpine July, 1999