Bradford Pears (Not a Recommended Tree)

The Bradford Pear, Pyrus calleryana ‘Bradford’, is a cultivated variety of the Callery Pear, which is reported to be a native of China. It is named after horticulturist Frederick C. Bradford, who cultivated and introduced the tree at the Glenn Dale, Md., USDA Plant Introduction Station in 1960. In the past, if you asked professionals in the nursery or landscape design industry to recommend a perfect tree, they may have recommended a Bradford Pear.

If you ask professional arborists about a Bradford Pear today, they may note many of the virtues -- but with a different perspective. The Bradford Pear was often described as a perfect tree that could tolerate our soil, provide white flowers in the spring, display magnificent fall color (bright to dark red and, sometimes, orange or yellow foliage), and produce small round fruit in the fall, which was reported to be sterile (or would not germinate). It is an attractive, medium-sized tree that is well rounded and often touted as drought tolerant and disease free.

There is no such thing as a “perfect tree,” however, and the Bradford Pear is not without fault. Since most of their limbs grow outward from one area of the trunk, typically four to eight feet from the ground, they tend to rub against each other as they grow and expand in diameter, creating cracks in the main limbs.

Many branches have weak angles of attachment and fail structurally (split apart) before the tree reaches 20 years of age. A tight V-shaped angle is more likely to suffer structural failure as opposed to a deep U-shaped angle.

Arborists prefer trees that have limbs that are evenly spaced along the main trunk, and branches with stronger angles of attachment that are not as prone to structural failure. 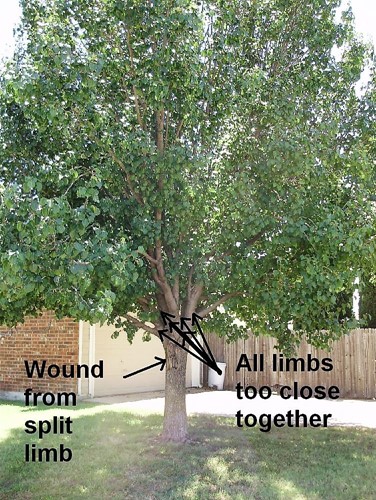 Other Callery Pear cultivars, such as ‘Capitol’ or ‘Aristocrat’, have a better branching habit. However, most Bradford Pears will split over time, and the gardening public is not well aware of this fatal flaw. A future public awareness campaign might include a bumper sticker: “Support Your Local Arborist ... Plant a Bradford Pear”. While they certainly create work for arborists, we much prefer to ensure the public knows what to expect before planting any species of tree.

While the flowers are attractive, they have an unpleasant odor. To make matters worse, the Bradford Pear and Callery Pear are listed as an invasive species in the eastern United States. They are known to “hybridize” and grow in dense, sometimes thorny thickets, which suppresses the growth of all native plants and trees in an area. Pears are not known to be an invasive species in our area -- yet. However, if we plant too many of any one species and ignore a balanced approach to species selection, we are inviting trouble.

If you recently planted a Bradford Pear, or have one growing in your yard, please forgive me for providing discouraging news. An arborist must maintain all regional tree species throughout their lives, which gives us a different perspective compared to others in the green industry. Unfortunately, we are often consulted after trees are planted, leaving us with the task of providing bad news.

If your Bradford Pear is still a young tree, corrective pruning may help to reduce the odds of structural failure and add a few years to its life expectancy. Pruning later in life can also be a benefit, but not as much as training the structure of the tree by pruning it from the time it’s planted.