Mistletoe is the common name for a parasitic flowering plant that grows attached to, and within, the vascular system of a tree or shrub. There are many different species of mistletoe, including some that are dwarf in size. All of them have root systems that are imbedded in the trunk, branches or twigs of a host tree, and because they extract nutrients (or plant food) as well as water for survival, they are not good for the health of your trees. (Would you want a parasite sitting at your table and eating your food as fast as you can bring it home? If you have teenagers, maybe you understand how a tree with mistletoe feels!) Note that some species of mistletoe do produce a portion of their own food through photosynthesis because they have leaves.

Mistletoe can affect a wide range of host plants and can spread to lower portions of a tree once it becomes established. It is also spread from tree to tree by birds, which feed on the seeds and deposit them in nearby trees. Mistletoe is an important component of the ecology in our area because a broad range of animals depend on it for food and habitat (such as roosting and nesting for birds).

Mistletoe does not normally kill a tree, but it can be a contributing factor in a tree’s loss if the tree has other problems. Mistletoe stays green in the winter when its host tree goes dormant, so if your elm looks like an evergreen tree this winter, you know you have a problem — utopia for a bird, but a plague for the elm. Unfortunately, limbs or trunks containing mistletoe can become weaker in strength, which increases the potential for structural failure (or breakage).

Assuming mistletoe has become a problem, smaller branches and twigs that are affected can be removed entirely to prevent its spread to other parts of the tree. Mistletoe in larger limbs or trunks can be removed at the bark, but it typically re-grows within a few months. Do not cut into the tree to remove mistletoe. 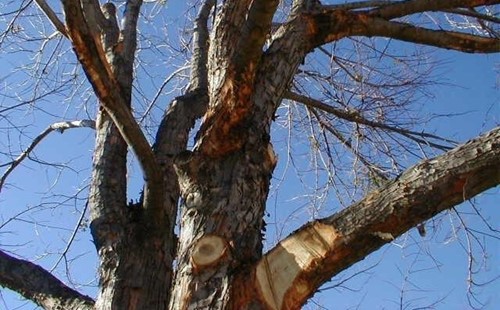 Example of poor cuts made to remove mistletoe. 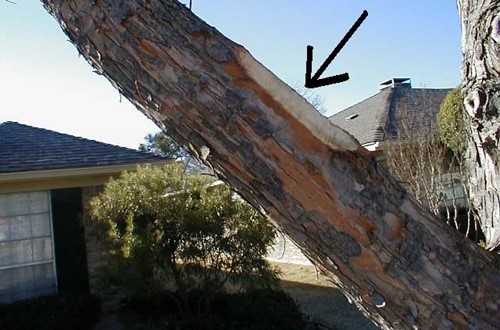 The "chili bowl" cut is not a proper cut to remove mistletoe.

Re-growth of mistletoe can produce seeds within a few seasons and should be removed every two to three years to reduce its spread. Many species of mistletoe rely on only one host (Oak, Elm, or others); therefore, planting a diversity of species can help to suppress the spread.

Some mistletoe species are known to be poisonous, while a few are reported by herbalists to have medicinal qualities.

Mistletoe is commonly hung over a doorway as a Christmas decoration. According to custom, two people who meet under it are obliged to kiss. After each kiss, a berry is picked until, alas, all the berries are gone, and no more kissing is allowed!

If you need a big smooch or you’re a naturalist, mistletoe is a treasure. If a tree's health or structural integrity is a concern, it’s a parasite. A bird (or sprig or kiss) in the hand is better than two mistletoe in the bush!