Duke Monson of New Hope checks the progress as crews from Arborilogical Services remove a dead tree from his property. Photos by KYE R. LEE/Staff Photographer with the Dallas Morning News.

In New Hope, a tiny Collin County town north of McKinney, a saga deeply rooted in Texas soil — not to mention the state’s economy — is beginning to play out in front yards, city parks, rural fields and urban forests.

At its core is a tale of up to half a billion dead or dying trees tagged as victims of last year’s drought, which severely scorched wide-open farmland and took a toll on glass-and-concrete laden cities such as Houston and, to a lesser extent, Dallas.

The statistical yardstick is staggering, with Texas agriculture officials estimating now that the drought caused record-breaking crop and livestock losses of $7.62 billion and counting. The Texas Forest Service estimates 100 million to 500 million forest trees may have succumbed to the drought.

In urban areas, another 5.6 million trees were killed. And experts say cities probably will feel the environmental and economic effects for years to come.

“The full effect of the drought and record heat won’t be known in a year. It will be five to 10 years,” said Steve Houser, owner and president of Arborilogical Services Inc. and a master gardener with the Texas Agriculture Extension Service.

The uncertainty of it all is unfolding in New Hope, where Duke Monson and Roger Kitchens are staring at the same crisis with different lenses and expectations.

Last week, as a gentle breeze swept across his nine-acre homestead, Monson, a 59-year-old New Jersey transplant, presided over the removal of a decades-old Shumard red oak that long has greeted visitors to his driveway.

He bought the property 22 years ago because it had so many trees,

“You hate to have to cut one down,” Monson said as a crew, armed with a chainsaw, began to mount the brown-leafed oak that an arborist confirmed was a victim of the drought. 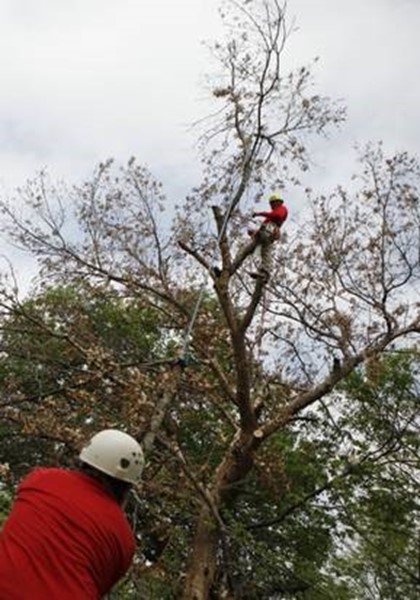 Miguel Pastenes, at top of tree, and Nicanor Buitron of Arborilogical Services work on cutting down a dead tree in New Hope. Photo by Kye R. Lee/Staff Photographer for the Dallas Morning News.

“But at some point,” said Monson, who paid Houser’s company about $400 to remove the tree, “this becomes a hazard and you have to get it down before it causes other problems.”

Monson said he feared that more of the hundreds of trees dotting his property might eventually succumb to the effects of last year’s heat — and that his wallet might take another hit before too long.

He counted nine dead trees on his property but said most of them died of other problems not related to the drought.

“We’ll have to wait and see how it all unfolds,” said Monson, president of the North Collin Water Supply Corp., a co-op that serves several small towns including New Hope.

Kitchens, who owns a budding tree-removal service on the outskirts of town, is waiting to see if this will be a robust year for his upstart business.

But so far, he hasn’t gotten any calls.

“I just get calls if somebody sees my sign out there,” he said, pointing to the white banner stretched across the front edge of his lawn. “I don’t get out and knock on doors like the big boys.”

Across Texas, however, many property owners are beginning to see the practical effects of last year’s excessive heat.

The Texas Forest Service projects it will cost about $560 million to remove the 5.6 million dead trees — a conservative figure based on the estimated cost of $100 to remove a tree that’s eight inches in diameter.

Texas cities stand to lose another $280 million a year in economic and environmental benefits.

“When you lose that many trees, you’re losing all the benefits which include how those trees clean our air, water and soil to begin with,” Houser said. “They also add greatly to our health, our sense of well-being, our quality of life and even our economic future in many different ways.

“Just look at a particular house. A real estate agent will tell you that a house with a nice tree out front will sell faster and for more money. So when you lose one, you’re losing value.

“Research also shows that, in businesses with a well-landscaped area and trees, people stay in those stores longer and tend to spend more money.”

But in reality, as the steadily escalating projected losses suggest, assessing the damage is somewhat of a guessing game.

“It’s a struggle to really be able to take this snapshot approach,” said Pete Smith, staff forester and lead researcher for the Texas Forest Service.

Part of the problem, he said, is that all the dead trees being removed may not have been killed by the drought — and many of the trees affected by the drought may not be showing signs of mortality yet.

Still, he said, “As far as numbers go, the totals keep mounting.”

Houston is one of the big cities whose tree population was hit hard by the drought. There, city and county officials are spending millions of extras dollars to remove thousands of dead trees from rights of way, parks and high-traffic areas.

“Houston has taken its trees much more seriously because they’ve lost more to hurricanes in the past,” said Houser. “In the city of Dallas, there’s just not that much interest in trees.”

Karen Woodard, the Dallas city forester, said she and others are still taking stock of the damage caused by last year’s heat.

But she said Dallas, which does not have a definitive inventory of trees, wasn’t affected as severely as Houston.

“Our situation is different in that we haven’t been in as extreme a drought as Houston. That’s No. 1,” Woodard said. “And No. 2, the trees in South Texas are used to having more water on a consistent basis.”

In Dallas, you can drive anywhere in the city and see signs of trees in distress. But Woodard said some of the trees may be reeling from other issues, such as disease or old age.

“We have not seen an exponential loss of trees” in Dallas that can be blamed on the drought, she said. “To be honest with you, we’ve lost a lot of trees, but we were losing them at the end of last summer.”

Arborists like Houser predict they will begin getting more phone calls as property owners begin to take stock of and deal with the damage.

“Trees are just starting to leaf out and people are beginning to see problems,” Houser said. “Over the next few weeks, people are going to start seeing the full effect and then they’ll start calling.”

“Some of the ones most affected didn’t belong here anyway,” Houser said. “Native trees such as the post oak typically aren’t affected as much by drought.

“That’s one of the reasons it’s native; if it’s going to survive the Texas heat, it has to be one tough dude.”

“I looked back at the record heat wave in 1980,” Houser said, “and when I looked at the nighttime temperatures over 85 degrees, there was none. Last year, there were at least 20.”

Both Houser and Smith said if a tree’s root system was compromised in the heat, it will start showing the lingering effects sooner or later.

“We’re beginning to see that now,” Smith said. “This is the proof that last year was tough and it takes trees a little while to let us know what is happening to them.”

For Monson and his wife, Patricia, one fallen red oak is enough to get their attention.

“There’s enough [trees] here for sure,” said Patricia Monson. “But it does affect you to lose one like that.”

Is Your Tree Dead?

Examine the tree closely for leaves, buds and growth. If the tree shows no signs of life, it may be dead.

Break off a small branch. If the twig breaks off easily and is brown inside without any signs of soft or green wood, your tree may be dead.

Scrape off a portion of bark with a knife or chisel. Look for green, soft wood just under the bark. If none is there, your tree may be dead.

Examine the larger branches of the tree. If they are brittle, break off or begin to fall, your tree may be dead.

Consult care guidelines for your tree if signs of new growth and healthy bark are found. The tree may be stressed and merely need additional care.

If in doubt, consult an arborist, who will be able to examine the tree fully and determine whether it is truly dead.

If the tree is dead, have it removed from your yard.

Tips for Selecting an Arborist

Check in the phone directory, usually under trees, tree service or tree care service. A listing at least indicates some degree of permanence.

Beware of door-knockers. Most reputable companies have all the work they can handle without going door to door.

Is the arborist certified through a local certification program or the International Society of Arboriculture? Some cities require arborists to have a license.

Ask for certificates of insurance, including proof of liability for personal and property damage and workman’s compensation.

Ask for local references. Take a look at some of the jobs and talk with the former client.

Never let yourself be rushed by bargains. Have more than one arborist give you estimates.

A reputable arborist will recommend topping a tree only under rare circumstances.

A conscientious arborist will not use climbing spikes if the tree is to remain in the landscape.

Beware of an arborist who is eager to remove a living tree. Removal should be a last resort.

Mr. Ragland is a staff writer for The Dallas Morning News.