Mass plantings of just one type of tree can be lovely. Nothing wrong with beauty, but there are important things to remember in evaluating the landscapes around you. Photos by Bill Seaman, except where otherwise noted.

It is easy to love large oaks or elms as they gently cascade over your street or home, providing welcome shade on a hot, sunny day. Large trees are the very foundation of a healthy and vibrant community. They provide 70 times the environmental benefits of small-stature or recently planted trees. 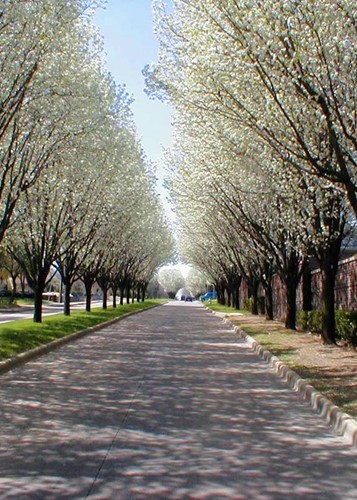 A monoculture of Bradford Pears is magnificent in bloom, but possibly an invitation to problems down the line.

Similarly, it is easy to love the many smaller-stature flowering trees and plants with their stunning reminder it is spring. A good balance between small and large trees is ideal in maximizing the many benefits trees provide a community. 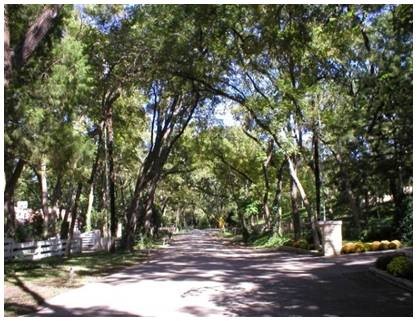 Monocultures are avoided by either planting a number of different species or by leaving existing trees when a property is developed. Photo by Mike FitzGerald.

Of equal or greater importance is a healthy balance among the various tree species planted at a home, on a neighborhood block, or in a community. Too many of one tree species in a yard, community, or urban forest creates a “monoculture,” which can eventually lead to arboricultural problems. Too much of a good thing is not always a good thing. This monoculture of Southern Magnolias creates an excellent screen and a uniform look. The aim might be for diversity elsewhere in the landscape.

In the 1940s and 1950s, urban planners and park departments planted solid stands of American Elms, Ulmus americana, along streets and in city parks. A magnificent archway of green foliage was created over the streets and parkland, drawing the envy of many neighborhoods and communities. Uniform rows of one species of tree provided a formal look that was aesthetically pleasing. However, to an elm bark beetle, the planted rows of American Elms were like a burger joint and motel at every house and park. Not only did the beetles move in like unwelcome relatives, they also brought another unwelcome visitor — Dutch elm disease, Ophiostoma ulmi.

Dutch elm disease killed many American Elms as bark beetles easily spread the problem. The American Elms lining the streets had looked magnificent, but the monoculture of Elms was deadly to the species in the long term. Most American Elms were lost in many communities, dramatically reducing neighborhoods’ quality of life, increasing energy costs, and decreasing air and water quality. Other tree-related benefits declined, too. 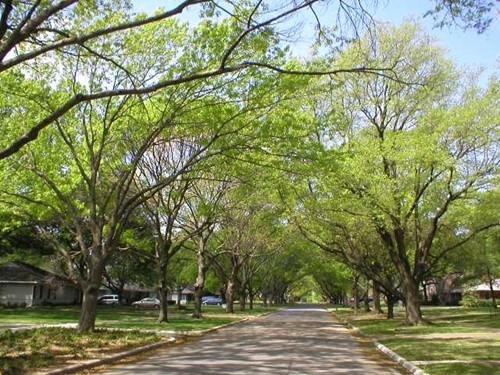 A tree-lined street with variable species growing in a row is still impressive. Photo by Mike FitzGerald.

Communities and rural areas in and around Austin enjoy natural stands of large Live Oaks along with a mix of Red Oaks. Unfortunately, Oak Wilt, Ceratocystis fagacearum, another deadly tree disease, has been causing significant losses. Unlike the Dutch Elm disease scenario, the host tree species are native to the area and not intentionally planted. Shumard Red Oaks in a row can have a stunning effect when the fall color emerges. The natural monocultures of Live Oaks in Texas, however, have run into recent trouble.

If a home, community, or rural area contains too many of one tree species, the potential for other insect and pathogen problems increases as well. The Southern Pine Beetle or Emerald Ash Borer, (which may expand into Texas soon) is an insect pest aided by monocultures. Leaf-related fungal diseases and many other pathogens require a host or particular species of tree to survive. Nature works to maintain diversity. If you plant it, the bad guys will come. They are nature’s “hit men.” They make sure one species does not dominate the others, or else it will end up “sleeping with the fishes.”

It is okay to plant a small grouping of one species, but planting large numbers is asking for trouble.

If most of the properties in your area have only one or two common tree species, make a conscious effort to diversify your urban forest by selecting another species to plant. Don`t put out a welcome mat for “Uncle Guido.”

The best asset that any small yard or large urban forest can have is species diversity.