Electric Company to Amp up Tree-Trimming in Dallas

The power company Oncor outlined an aggressive tree-trimming plan Wednesday that targets 1,500 miles of electrical lines in Dallas, reviving the prospect of confrontations between homeowners and tree cutters.

Company officials said they are reverting to tougher pruning policies after severe outages the last couple of years, caused in part by trees that knocked out power lines in wind and ice storms. But some homeowners and arborists say the change will rekindle complaints about tree tops left mangled in V-shape cutouts.

The tension over individual property rights vs. a utility’s need to provide reliable service was a recurring theme in Oncor’s presentation of its tree-cutting projections to the Dallas City Council, which largely gave it a friendly response.

“Tree trimming is the most contentious thing we deal with on a day-to-day basis,” said Charles Elk, vice president of Oncor’s Dallas customer operations.

The briefing came amid Oncor’s stepped-up campaign to boost communication with city leaders, residents and others about its latest efforts. Getting the most attention: its decision to remove vegetation and tree limbs farther from electrical lines, as it had been doing several years ago.

Tensions flared in 2010 when the company, which is allowed to cut growth that interferes with power lines, gave some neighborhoods the first major chop in decades. Many residents were outraged by what they considered butchered trees. One Lakewood woman climbed into a tree with a pellet gun to defend it against Oncor.

The company responded by easing its requirements that trees be cut 10 feet from lines, going instead with 7 feet. Now, it’s returning to the 10-foot buffer and it says it will reach more neighborhoods than it has recently.

So far, Oncor has cut trees and vegetation along 471 miles of its distribution lines in Dallas, including along alleys, streets and yards.

It wants to complete 1,450 miles by May and 100 more later in the year — the equivalent of driving from Dallas to New York City. Neither Elk nor Spears could say how many miles it did the last two years.

“We are doing more vegetation work than we have done in the recent past, and we’re frontloading it to the first five months of the year,” Elk said. 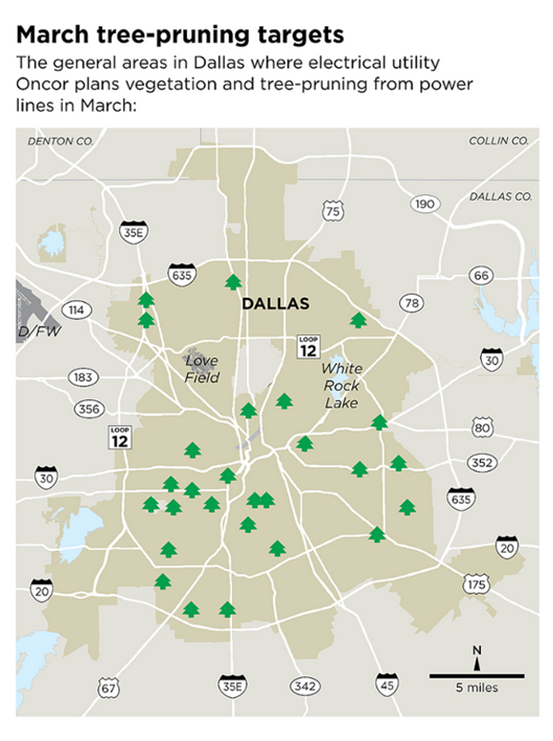 Elk said the company’s goal is to avoid problems during the months when customers often lose power. Oncor pays for the tree pruning and debris removal, not homeowners.

“What we’re trying to do here, very simply, is get ourselves in a situation where during spring storms, we won’t have a widespread outage,” he said.

Elk said the company seeks to educate residents about their trees and power. Oncor distributes mailouts and door hangers to houses and homeowners associations. So far, it has distributed nearly 44,000 door cards, and says it has arborists ready to answer residents’ questions.

Arborist Steve Houser, who owns a private tree-cutting firm and favors having the city take a more direct role in tree management, said he wasn’t aware of many complaints about pruned trees lately, but increasing the space around lines again could do it.

“Oncor is going back to 10 feet, which is not going to please people, because that’s what the problem was years ago,” he said.

Lakewood homeowner Jim Conine said he was stunned to learn the company was reverting to the 10-foot rule. In 2010, he helped organize his neighborhood to oppose that distance and said he would do so again.

He said too-extreme tree cutting on his property had caused the trees to become unbalanced and less likely to survive long term.

“This is a matter of convenience for the power company — they only want to come through about once every seven years,” he said. “Other cities have taken on more frequent and less aggressive cutting, and they’re better for it.”

Unlike in some areas, Oncor does not do species-specific trimming, which would allow them to cut slow-growing trees less and make overall pruning less drastic.

Elk said the company has considered it, but believes there are too many trees and growing factors to consider.

Homeowners have the option of signing an alternative maintenance agreement to hire a private line-clearance certified arborist to cut trees. That would allow them to keep the 7-foot buffer, Oncor says.

But in pamphlets, the company warns of the risks facing untrained people who cut trees near live power lines.

City Council members generally praised Oncor for what they called vastly improved communication and its responses to power outages.

The company does not have to get approval from the city for its plans, but gave the briefing as a heads-up, knowing council members probably would get calls from constituents about the tree-cutters.

“Y’all have turned me into a big fan,” said Rick Callahan, who represents Pleasant Grove in eastern Dallas.

North Dallas council members Sandy Greyson and Philip Kingston said they understand the frustration of homeowners who end up with mishaped trees, but they need to recognize the dangers of overhanging limbs. And, they need to avoid planting trees under power lines.

“I would say to neighbors who are upset about having their trees trimmed: Be reasonable,” Kingston said. “If they’re planted under power lines, they’re going to get trimmed.”

Raymond Crawford, president of the Kiestwood Historical Home Owners Association in southern Dallas, dealt with anger from neighbors five years ago when tree canopies were chopped in front of their houses for the first time in decades.

“Sometimes they trimmed it so bad that, in my mind, it would have been better to just cut the tree down,” he said.

He praised Oncor for having communicated better with residents since then and said he has not heard anyone upset about the cuts that have occurred in the neighborhood so far this year.

He said Oak Cliff pruning has been more frequent in recent years, so the changes aren’t as drastic all at once.

“It’s a delicate balance between keeping power on, having residents be happy and not having trees look like they’ve been butchered,” he said.

Ms. Findell is a Staff Writer for the Dallas Morning News.