The cover of the Texas Heritage magazine Volume 3, 2017.
Download PDF

The CaliforniaCrossing Indian Marker Tree, located on the grounds of the National Guard Armory in Dallas, likely signaled a low-water crossing point along the Trinity River. All photographs provided by Steve Houser.

American Indians once used trees like highway signposts, bending and securing young saplings to mark important landmarks and resources. The Texas Historic Tree Coalition is working to identify, document, and officially recognize these culturally modified trees, before they disappear from the landscape - and the state's historical record.

An Indian marker tree is one that was purposely bent over and secured in that position when it was small, eventually taking on an unusual appearance as it matured. Some tribes used binding ties made with a thong of animal hide, which is where the term "thong tree" originated. The Comanche, who claimed areas of North, Central, and West Texas as tribal territory, secured a sapling with rope made of yucca and weighted with rocks. According to Comanche Nation Tribal Historic Preservation Officer Jimmy W. Arterberry, plant fiber was more widely used because animal hide was a valuable resource.

Steve Houser points to a scarred area in the trunk of the California Crossing Indian Marker Tree.

Historically, American Indians have lived in complete harmony with their surroundings. Native people relied on nature for all their needs--food, shelter, and even travel. Many years ago, moving from place to place required good navigational skills, directions along the way, and a method of marking common trails. American Indians used trees not only to indicate a favored route, but also to signal the presence of important landmarks and resources, some of which were critical for survival.

These natural signposts are no commonly known as Indian marker trees. They are also called trail trees, thong trees, and culturally modified trees. Regardless of their names, the trees had the same purpose: to guide others to water sources, safe river crossings, a campsite, or important natural features. To those who could interpret their meaning, these guides were lifesaving road signs.

Why so do few people today know about these cultural marker trees? The most likely reason is that American Indians did not openly share information about their way of life with outsiders. Instead, they handed down customs and practices as part of their oral tradition. In time, as edlers passed away, the stories of these special trees and the roles they played within a tribe's culture were lost.

A genuine marker tree is a rate find--only six have been documented in the North Texas area and officially recognized...A pecan with a long arching bow in the trunk, located in an East Dallas park, was the first to be recognized in 1996.

Through the years, TxHTC has received information on more than 550 potential Indian marker trees from landowners, foresters, historians, and hikers. To date, however, only 75 investigations of those candidates have been completed, with research on another 82 underway. The verification process begins with a simple question, "Is the tree old enough?"

Determining an age range for a tree requires information on the size of the specimen, the species, and side conditions, including the type of soil. Researchers also request specific measurements as well as photographs with a person standing nearby, for perspective. Once the potential age is determiend to be approximately 150 years or older, and the bent shape of the tree shows promise, a site visit is made to record more detailed information.

Trained volunteers visually inspect the Indian marker tree candidate and discuss the history of the area with the property owner. More research is undertaken, including a review of a topographical map of the site, to identify features that might have been important to the Comanche people. For example, the existence of a nearby high point (an ideal site for sending a smoke signal or placing a lookout to signal approaching travelers) might offer an explanation for the presence of the marker tree under inverstigation. Elevated areas and other significant terrain features, such as location near a low-water river crossing or natural springs, are topographical clues that could suggest a reaon for establishment of a marker tree. Reviewers also assess whether a tree is situated near known trails. Additionally, area archeological archives and early pioneer cemetery records are studied for traces of Comanche presence. Original land grants and ownership documents are examined as well, and local historians are called upon to provide input. 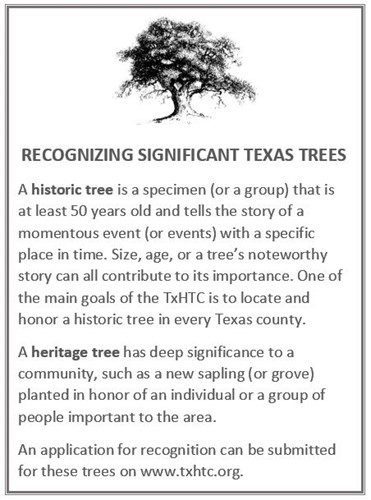 LIVING WITNESSES TO THE PAST

A genuine marker tree is a rare find--only six have been documented in the North Texas area and officially recognized by the Comanche Nation. Research can take years to complete and submit to Indian officials. A pecan with a long arching bow in the trunk, located in an East Dallas park, was the first to be recognized in 1996.

Indian marker trees are living witnesses to the history of a past civilization, but their life expectancy is limited. This underscores the urgency to study and document as much information as possible about known, and yet-to-be-found, intact specimens. One of the best ways to do that is be creating awareness and providing education about the existence of these American Indian treasures. 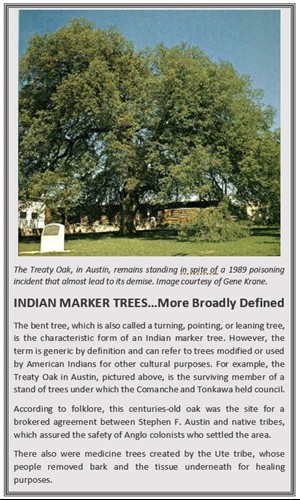