Invasion of the Giant Bark Aphids

Giant Bark Aphids, including the winged adult that has reached a length of over one-half inch. Photo by Texas A&M Forest Service.

The North Texas Live Oaks and Red Oaks are sustaining an inordinate population of the Giant Bark Aphids this year. Many of you have noticed a large amount of sap or honeydew dripping onto concrete walks and drives. This is an indication that your Oaks are infested with Giant Bark Aphids.

This is an insect pest that attaches itself primarily to one and two year-old twigs. They derive their energy by drawing fluids out of the tree. The material that is falling is their waste material and is called “honeydew”. It is not unusual to see small populations every year. However, for some reason, they have multiplied to incredibly high numbers. This insect will go through a number of stages, or instars, until they become a winged adult. Normally, winged adult aphids fly off to other plant material to lay eggs and repeat the process. It appears in this case that the adults are very content with remaining on the tree in which they hatched. What this has produced is a population of Giant Bark Aphids not seen in our area for some time.

They will not kill a tree; however, with pest levels this high, they can stress the tree. In many instances we will manage this pest for nuisance reasons. The insect usually dissipates after a cold snap or as we approach the heat of the summer. The two extremely cold nights we had in March did little to reduce populations. This is likely due to the fact that they huddle together in masses of up to several hundred, thus surviving from each other’s body heat. It appears that the current populations are not going anywhere in the near future. 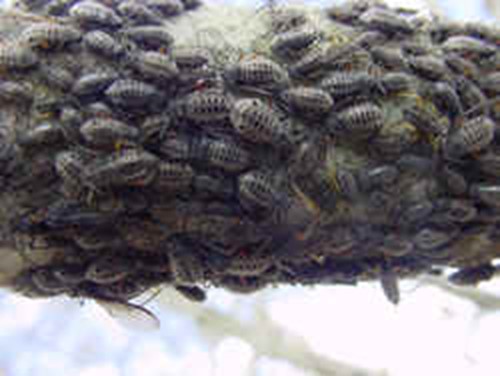 Normal biological control such as birds, lady beetles, and such, have little if any effect on reducing pest populations. They are an insect with a rapid reproductive cycle and new young are produced daily.

There are very effective management tools available for elimination of this pest. Often a spray will be required to manage the existing population, and we will often recommend a soil injected systemic insecticide that will be moved into the twigs and leaves of the tree. This material will also provide protection against other insect pests for about 6 to 8 months. If you experience an unusually high population of Giant Bark Aphids, please contact your arborist so they can recommend the most appropriate management plan for your trees.

Mr. Peters has a masters degree in plant pathology, is a Board Certified Master Arborist and is recognized as one of the foremost experts on the deadly disease Oak Wilt. Mr. Peters is a member of the certified arborist team at Arborilogical Services, “The Experts Your Trees Deserve.”®