Besides being a respected arborist, he may be the best friend a threatened tree ever had.

“You’re out at the end of a limb, 90 feet high, flapping in the wind and trying to maintain control of a chainsaw. If you don’t feel alive then, you never will. “Steve Houser is talking about his job, which causes his otherwise quiet voice to rise and his hands to flutter with excitement. 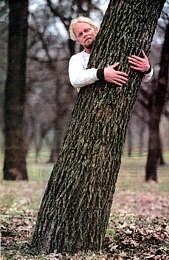 Alison V. Smith/DMN - Steve Houser has nominated 120 trees that have earned places on the Metroplex Champion Tree List, according to a Texas Forest Service citation.

Call him a tree hugger (he probably won’t mind); Mr. Houser, the owner of a Wylie tree-care service, has been recognized as one of the area’s most accomplished arborists.

After more than 20 years in the business, he has become expert at planting and feeding trees, consulting about trees’ health and appraising their value, and pruning them to eliminate disease, weak limbs, and wind resistance.

And as a competitor, sponsor, and judge of professional tree-climbing competitions from Dallas to Birmingham, England, Mr. Houser has made a name for himself high above the ground. In fact, the International Society of Arboriculture’s annual climbing competition in Texas awards a trophy now known as the Houser Cup.

Mr. Houser has always looked up in the air for excitement.

While at Mountain Valley College in Dallas, he attended classes in the morning, maintained trees at Brookhaven Country Club in the afternoons, and went to pilot school at night.

He earned his airplane mechanic’s license, but a medical condition prevented him from getting his pilot’s license – when he lacked just three hours of night flying time to qualify.

At that point, he took a harder look at trees for his future – and his adventure.

“Tree climbing sort of took the place of flying for me,” he says with a grin.

At 46, Mr. Houser admits that it’s a little unusual for an arborist his age to be climbing.

Mr. Houser stretches his passion for trees into many community projects.

He’s a founder and past president of the Dallas Historic Tree Coalition, founded in June 1995 both to save significant trees and to document their history.

Mr. Houser has worked with the Dallas Park and Recreation Department and Scottish Rite Hospital to clean up Reverchon Park. And he pulled together tree companies from all over the region for a pro-bono “tree renewal” in historic Dealey Plaza.

He’s also a Master Naturalist and a Master Gardener, volunteering many hours through the Texas Forest Service, Texas Parks and Wildlife, and the extension service.

“On some projects, I’m the inspiration, on some I’m the perspiration,” he says.

When you get people together who are passionate about the environment, he says, “there are always plenty of rock throwers but usually not enough people pushing for workable solutions.”

Hearsay and emotion shouldn’t dominate the discussion, he says, though they often do. It was emotion, however, that pushed Mr. Houser into his first high-profile campaign. One of his firm’s longtime clients, Presbyterian Hospital, asked him to bid on clearing a plot of established trees to make way for new construction on the property.

Just a few years earlier, his firm had worked to save many of the same trees, some planted more than a century ago, when a day-care center was built on the hospital campus.

“I knew those trees really well,” he says, looking back. “How many friends do you have who’ve been around since 1845?”

Mr. Houser knew there was a risk challenging the cut-down plan – losing the account would be a financial blow to his firm and to his family. He talked out the issue with his father, an artist and musician who had always encouraged his son to follow his heart.

He took his dad’s advice. And he lost the account immediately.

Mr. Houser became a leader in the effort to persuade the hospital to adopt a more environmentally friendly plan. The tree coalition was born, and the group ran a two-page ad in The Dallas Morning News explaining the plight of those trees and the benefits of an urban forest in general.

The coalition hired Austin-based architect Tommy Upchurch to review the plan with the hospital, and Mr. Upchurch’s recommendations accommodated the new construction while saving about two-thirds of the trees in dispute.

And while the final result “was a win-win – the hospital even saved money on the project,” Mr. Houser says – his approach to such conflicts has evolved a lot since that effort.

“When you mix the things I love – trees, nature, business, politics – things get challenging,” he says. Today, Mr. Houser prides himself on his ability to bring conflicting sides together in an environmental dispute by making a case backed by science, safety, business sense, and good ecology.

Mr. Houser was recently honored by the Texas Forest Service as the state’s Professional of the Year for 2001.

Growing up, Mr. Houser “was always really interested in nature.” And that meant trees and fishing.

“My dad really wasn’t too interested in that stuff,” but he spent many days walking in the woods and hauling fishing tackle – “he even joined a bass club,” Mr. Houser remembers, “so we could fish more together” – to nurture his son’s interests.

He also taught young Steve how to save his money for the tree farm he decided – at the age of 8 – that he was going to buy.

Determined? You won’t have to convince his staff at Arborilogical Services in Wylie, who affectionately call him “Chivo plumo blanco,” the blond billy goat.

It’s partly a reference to the appearance that his blond goatee gives his face, but really, says staff arborist Rosalindo Ruiz Carlos – a champion climber himself –because he’s surefooted, “like a goat that can climb the highest mountain without falling.”

Climbing skills are a big part of the company culture.

“I’m really proud that climbers from our company have made it to national and international competitions for the past ten years,” Mr. Houser says.

Mr. Houser founded Arborilogical Services with his good friend Kevin Bassett in 1980 after they worked together at the country club.

“I like to wear a lot of hats: I’m a father, business owner, arborist, educator, volunteer, tree farmer,” he says. And most recently, a champion of big, old trees.

Mr. Houser has always recognized that full-time office work would not be his destiny. Hiring a CEO for the firm allows him to split time between field work and the office.

“It’s much easier to get me on my mobile number,” he says.

As an arborist, Mr. Houser says, “I believe my client is the tree.”

He admits that’s not a universal outlook in the tree-care business, but he believes that perspective is growing.

“I’m a businessman – I understand business as much as the next guy,” he says.

“But one of my goals is to educate people, our customers and the public at large, so they can see when saving old trees is actually a good business proposition.”

There’s an ethical challenge nearly every day, he says. Some developers will pay big money for a report that says trees they want to remove are unhealthy or unimportant.

Mr. Houser’s arborists don’t work on commission, so they are able to walk away from an unpalatable request without hurting their own pocketbooks.

But Mr. Houser’s favorite role is teaching kids. He often visits third-, fourth-, and fifth-grade classes in Plano, bringing his message of the value of trees.

“Most speakers come in a suit or ‘normal clothes’ – I show up with my hard hat and eye goggles and my saddle, carrying a rope and my ear protection,” says the man teachers often introduce as Mr. Tree.

“Ask a class to name the benefits of trees, and the kids can come up with more answers than teachers can,” he says. “Kids are more in tune with nature than some adults.”

Mr. Houser is often motivated by kids – his own.

“I can’t face the idea of my kids saying, ‘Your generation ruined our environment. YOU cut down historic old trees,’ ” he says.

I want to be able to say, “I did the right thing and followed my heart.”

It’s interesting, he acknowledges, that Mr. Tree is a guy who takes out a lot of trees with a chainsaw every day in Dallas.

“There are people who think no tree should ever be cut down for any reason,” he observes. “I don’t think that is a responsible position, either. But the reality is, you don’t have to take one extreme or the other.”

Favorite Movie: My Side of the Mountain

Favorite Book: Natural Capitalism, by Paul Hawken and others

I drive a: Four-wheel-drive truck

My heroes: My parents and wife

The best advice I could give a 20-year old is: Find and do what you enjoy, set your standards high, and give your best effort

My worst habit is: Obsessing over issues that greatly concern me

If I had a different job, I’d be: Treehouse builder

I’m happiest when: I am with family and friends.

I regret: Poor decisions in the past that ignored the “little voice inside”

Mr. Peters is a staff writer for The Dallas Morning News.