Loss of Branch May Be a Gain: Oak's Life Might Be Cut Short, but Limb Could Reveal True Age

PLANO -- The city's oldest tree, which could predate the pilgrims at Plymouth Rock, just lost its largest limb and possibly years off its life.

But the huge branch that crashed onto the forest floor of Bob Woodruff Park last week may bring new clues about the true age of Plano's Bicentennial Bur Oak.

Arborists say the tree's estimated age of 243 may be a couple of centuries short. Now, with a sudden trove of wood samples, they're setting out to prove it.

"It's sad to see an old friend like this ailing," said Steve Houser, an arborist whose tree-care company contracts with the city.

"The good part of it is, we're going to learn an awful lot about the tree," says Arborist Steve Houser.

"The good part of it is, we're going to learn an awful lot about the tree," Mr. Houser said. "Now that we have pieces of the tree, it's going to tell us more about its past."

"Now that we have pieces of the tree, it's going to tell us more about its past."

Last week, high winds apparently caused the rotting 45-foot-long limb to fall. It took three dump trucks to haul away massive amounts of wood, most of which will be recycled for compost. 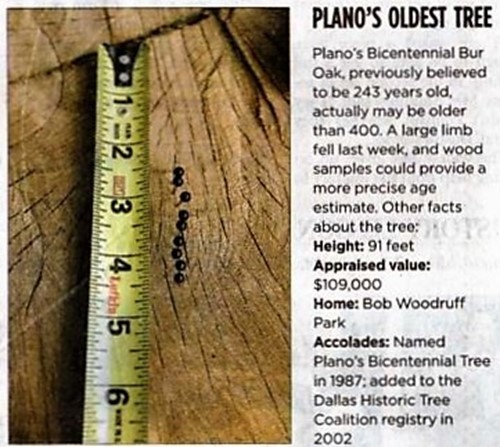 Renee Burke, Plano's urban forester, has been marking cross-sections of the limb with pins that chart the tree's growth. On Monday, she dropped off a sample at the University of Texas at Arlington, where scientists will examine the wood with an electron microscope.

"This is kind of an opportunity to figure out how old it really might be," Ms. Burke said. Mr. Houser, who also leads Dallas' Urban Forest Advisory Committee, said new methods of determining a tree's age could show that the 91-foot-tall bur oak is more than 400 years old.

These new methods recently enabled Mr. Houser to calculate the age of two post oak trees in Farmers Branch at more than 300 years.

Plano proclaimed the towering bur oak the city's Bicentennial Tree in 1987, recognizing that it was standing when the U.S. Constitution was signed 200 years earlier.

No one knows for sure, but the Bicentennial Tree could be the oldest in Collin County. It may have provided shade for Caddo Indians and then for white settlers who moved into Plano in the 1840s.

In 2002, it became the first Plano tree placed on the Dallas Historic Tree Coalition's registry.

The tree lost 30 percent of its canopy and leaves, which urban forester Renee Burke described as its "food factory." The falling limb also left a gash in the trunk, leaving it more vulnerable to decay. Ms. Burke says these factors could shorten the tree's life by decades. Photo by Rex C. Curry/Special Contributor to the Dallas Morning News.

The tree's thick grayish-brown bark probably protected it from fires over the years, and nearby Rowlett Creek nurtured it with rich soil and sediments. Last year, the tree was appraised at about $109,000.

Ms. Burke predicted four years ago that the tree could live for another 150 years. But she said losing the gigantic limb could shave decades off its life.

The tree lost 30 percent of its canopy and leaves, which Ms. Burke described as its "food factory." In addition, the wayward limb left behind a gash in the trunk that will not heal for years, leaving it more vulnerable to decay.

Still, despite everything the tree has been through, M s. Burke said it won't be vanishing anytime soon.

"I don't think it's a sign of its immediate departure," she said. "The tree's been around for a very long time."

North Texas horticulturist Neil Sperry said losing a major limb is a setback for any tree. But much like the landmark Treaty Oak in Austin, Plano's Bicentennial Tree has shown a capacity for endurance.

"Oak trees move in somewhat slow motion," Mr. Sperry said. "Look what happened to the Treaty Oak -- it lost half of its canopy, and it's still alive and well, and it's 400 to 500 years old.

"These things happen, even with incredibly wonderful, big trees. That's just kind of the way a tree declines."

Mr. Batsell is an Associate Professor, Division of Journalism for Southern Methodist University. Previously he was a Staff Writer for The Dallas Morning News.