About half the trees are dead because of summer heat, heavy winds and insufficient watering, said Steve Houser, a certified arborist. The rest are struggling. 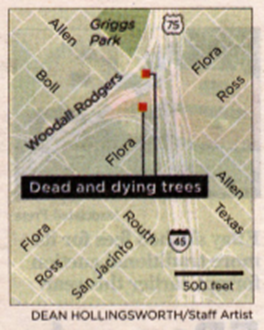 "It's a graveyard out here," Houser said. "It's depressing for an arborist or a gardener, but it is also depressing to people driving and living along this area."

Four years ago, Texas Trees Foundation, a private, nonprofit group, planted more than 1,100 trees, mostly bald cypress, near the intersection of the two freeways. The project was undertaken in collaboration with the Texas Department of Transportation.

But a mixup between TxDOT and the foundation left the trees unwatered for months. According to a contract, the foundation is responsible for the maintenance of the trees -- including watering -- for five years, but the foundation thought TxDOT was handling it.

TxDOT and the foundation are talking about replacement trees.

Mr. McGraw is a reporter for The Dallas Morning News.