Dead Bald Cypress trees at Woodall Rodgers Freeway are anything but green.

Four years ago, Texas Trees Foundation planted more than 1,100 trees to reduce air pollution and add a bit of nature to downtown for taxpayers. But the trees have struggling to survive this summer after a snafu has left the trees with little to no water for months.

About half the trees are dead because of summer heat, heavy winds and insufficient watering, said Steve Houser, a certified arborist.

The rest are struggling.

"It's a graveyard out here," said Mr. Houser, chairman of the Dallas Urban Forest Advisory Committee, which reports to the City Council and the city's Park and Recreation Department.

"It's depressing for an arborist or a gardener, but it is also depressing to people driving and living along this area. It is just devastating. This is counterproductive."

Even this week's heavy rains won't help much, Mr. Houser said. The dead trees are dead. And the dying ones have gone into a self-induced dormancy, causing their needles to dry out and fall off.

"The problem doesn't go away just because they got some rain," he said.

Four years ago, Texas Trees Foundation, a private, nonprofit group, planted more than 1,100 trees, mostly bald cypress, near the intersection of the two freeways. The project was undertaken in collaboration with the Texas Department of Transportation.

The effort, paid for with $173,000 in TxDOT funds, was intended to reduce air pollution while adding a touch of nature to downtown, officials said.

But a mixup between TxDOT and the foundation left the trees unwatered for months. 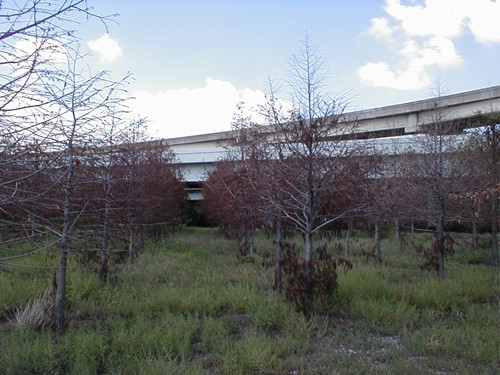 According to a contract between the Texas Trees Foundation and TxDOT, the foundation is responsible for the maintenance of the trees -- including watering -- for five years. It's also responsible for mowing, pruning and picking up trash in the area.

"Apparently, there was a miscommunication," said Patrick Haigh, the landscape architect for the TxDOT's Dallas office. "We agreed to pay for the water. They were responsible for watering. That was our understanding."

Foundation officials said they thought the opposite -- meaning the trees were never tended to.

Janette Monear, the foundation's executive director, said her group thought it was responsible for maintaining the irrigation system, but that TxDOT was supposed to do the actual watering -- beyond whatever moisture came from rainfall.

In a statement issued this week, she said: "Mother Nature [was] responsible for keeping the site watered."

Ms. Monear added that she didn't become executive director of the foundation until last November, and doesn't know everything that transpired before then. "I wasn't here, so I'm not going to point fingers," she said.

With normal rainfall, the trees should have done well, Ms. Monear said. But the lack of rainfall through the first seven months of this year caused some trees to become stressed.

Another problem was that the trees were planted too close to one another, she said. Another was that vagrants ripped up the irrigation system.

TxDOT and the foundation are talking about replacement trees, but that wouldn't happen until the fall, when cooler temperatures would help foster growth, Mr. Haigh said.

While the two sides continue to argue about who was responsible, they agree that the trees are in distress.

"The water needs to be turned back on," said Ms. Monear.

Mr. McGraw is a reporter for The Dallas Morning News.