Miguel Pastenas, a foreman with Arborilogical Services on Steel Road in Wylie, (www.arborilogical.com) will represent the Texas chapter of the International Society of Arboriculture in a tree-climbing competition in Missouri July 26 and 27.

Pastenas will meet other professional arborists from around the world at the aptly named Forest Park in St. Louis for the International Tree Climbing Championship. The event is held in conjunction with the annual conference of the International Society of Arboriculture, and will, according to materials from the ISA, feature the world’s best tree climbers.

An arborist is a professional working in the management and maintenance of trees and/or shrubs, vines and other perennial woody plants. These professionals, formerly called "tree surgeons," focus on health and safety of individual trees and wooded landscapes, rather than managing forests of harvesting wood. Source: Wikipedia 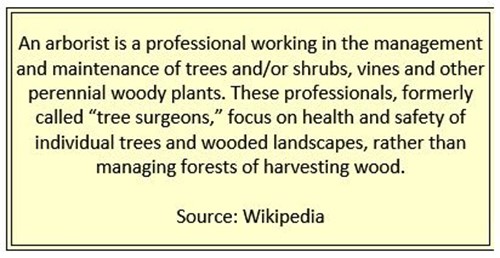 It should come as no surprise that Pastenas has achieved this level of competition; he was trained by Steve Houser, one of the owners of Arborilogical Services and a long-time supporter of the competition.

Houser has provided both financial backing and "thousands of hours" working to train up-and-coming arborists around the state to be "the best they can be."

"The competition started with tree climblers arguing who was the best in the state, and we found a way to ensure who truly is the best," Houser said. "In the early years, there was a limited amount of knowledge or support for the event. Being a tree climber all of my life, I wanted this event to continue when there was little support from other arborist."

“We’ve set the bar pretty high,” Houser said. A representative of Arborilogical Services has won the state title for 16 years. Houser said other competitors have decided his arborists are the ones to beat.

Houser said Pastenas is highly talented and quite a success story; he has snagged the state championship within three years of beginning to compete. He also brought home a first-place trophy two years ago at the international level in one of the speed events. “I am proud to represent all the tree climbers in the state in this international competition,” Pastenas said.

Tree climbing may sound like a kids’ lazy summer afternoon activity, but the competition is far from it. It simulates working conditions similar to those encountered by arborists working in the industry. “It’s a sport as well as a profession,” said Houser.

Houser also said that being an arborist has been ranked the second or third most dangerous profession by insurance agencies. “There were a few years when we couldn’t compete due to problems being insured,” he said.

According to Houser, there are five events in which climbers compete for the state title. Points are accrued in two speed-related events in which arborists must get up a 50-foot rope using two different methods and then ring a bell at the top. In one method, called the “foot lock” method, the climber holds the rope with his hands and raises his feet up near his chest to bite on the rope and advance up the rope three to five feet with each bite.

The other is called the “body thrust”; in it, the climber ascends the rope with his feet on the trunk and hands on the rope. He throws his hips forward as he pulls back on the rope and advances several feet with each movement.

There’s also an aerial rescue in which a dummy is positioned in a tree and arborists must climb up, bring the “person” to safety, and administer CPR. The fourth is called the throw line event – targets are placed at 40-, 50- and 60-foot-high points in a tree and climbers must throw a line safely through the target and get the rope back to the ground as fast as possible. “Sometimes the target is only six inches wide and positioned in the fork of a tree,” said Houser.

Finally, arborists compete in a work climb event. Climbers must move quickly and efficiently up into a very large tree that has had several workstations positioned in it, perform various tasks at each station, and then land at a specific point on the ground.

The top four high scorers in these preliminary events move on to the Master’s Challenge the same day.

Similar challenges face them in the final round, and, Houser said, the events will be much the same at the international competition.

“It takes a lot of mental as well as physical strength and capability,” Houser said. You’re working as high as 60, 80 or 100 feet in the air, hoisting your weight up, carrying a chainsaw all the way.”

The International Tree Climbing Championship began in 1976; today, International Society of Arboriculture chapters hold competitions all around the world. According to ISA officials, the competition provides a variety of benefits.

“The ITCC provides a great opportunity for arborists to learn new techniques from one another and get a chance to see new and different equipment,” said ISA Executive Director Jim Skiera. “This event also provides arborists with exposure to the public which educates them regarding the skills involved in safe, professional tree work.”

Both male and female competitors take part in the event, and this year, those with the highest scores will move on to the Masters’ Challenge competition on Sunday, July 27. Winners at that level of competition will be declared world champions. Men’s champion for ’07 is Bernd Strasser from Germany; women’s champ is Chrissy Spence from New Zealand.

“Through the years, due to new technology and safety advances, competition events have changed and improved to represent the latest in tree-climbing equipment and practices,” the group’s materials said.

The International Society of Arboriculture has headquarters in Champaign, Ill., and is a non-profit organization dedicated to fostering a greater appreciation for shade and ornamental trees and promoting research, technology and the professional practice of arboriculture, according to the group’s materials. The ISA has over 29,000 members and certified professionals representing more than 40 countries. It started as a group dedicated to discussing problems associated with shade trees; the original name of the group was The National Shade Tree Conference. It became the International Shade Tree Conference in 1968, and, in 1976, changed its name to the International Society of Arboriculture “to more accurately reflect its broadening scope.”

And what does Pastenas say about the likelihood of winning at the international competition? “I think I have a pretty good chance,” he said.

Houser agreed. “I taught our guys a few tricks no one else knows. It helps us keep our edge.”

Ms. Truesdell is a staff writer for THE WYLIE NEWS online at wylienews.com.