Reverchon Is One of Dallas' Most Successful Parks, But It Wasn't Always So

The view of downtown Dallas from Reverchon Park. Photo posted publicly on Google.

Across the aged masonry that crowns its southern hillside, the history of Reverchon Park is carved in stone.

Scratched into sandstone benches and chiseled on table slabs, these testaments to love and ego footnote the park's long saga - from J GARCIA 4-11-08 all the way back to RIO SOLIS 4-3-47.

Reverchon is one of Dallas' oldest and most successful parks - its 90-year-old baseball diamond and 46 acres of trails and meadows in constant demand. Violent crime is unheard of, and the city is about to pour $1.5 million into the latest set of improvements.

But it wasn't always so, as the stones attest. They have been engraved for generations, as thick with dates as calendars, yet they bear no trace whatsoever of the 1990s.

Those were the years when even vandals dared not visit - when the hills grew thick as forests and needles littered the meadows, when muggers strolled and Reverchon was almost lost to history.

A story is passed around by those who rescued the Oak Lawn park: They say it started with a 13-year-old boy who lost his legs in a car accident.

One day in 1998, while learning to use his prosthetic legs at the Texas Scottish Rite Hospital for Children, the boy told the CEO he wanted to play in the park next door.

J.C. Montgomery, the CEO, told the boy the park was too dangerous, to which the boy is said to have replied:

"You told me I can do anything in life I want. And you can't clean up a park?"

"It was like an arrow through J.C. Montgomery's heart," says Steve Houser, an arborist who took part in a massive cleanup of the park that Montgomery initiated later that year.

But in his office at the hospital, backlit by a panorama of Reverchon's tidy meadows, Montgomery walks the tale back.

"We're a children's hospital!" he declares in Tennessee twang. "We had a 30-acre park in our backyard, and we had a bunch of druggies down there?

This is America, and Reverchon Park has been around for a good chunk of its history.

Built in 1915 on a patch of forest, cliffs and creek bed, the park was named for a renowned botanist who collected plant specimens in the area.

It quickly transformed from wilderness into a civic hot spot, gaining a baseball diamond in the 1920s, then an iris garden and the hilltop stonework during the Great Depression.

Joseph Ashmore Jr., 76, remembers his mother and aunts trekking to the park every Saturday and bringing back jugs of artesian well water - "yellow as yellow teeth" - that was widely thought to have therapeutic properties.

In subsequent decades, the park evolved into a countercultural mecca. It went through its beatnik phase, its hippy phase. By the 1980s, bikers and gay men shared its meadows in relative harmony.

Then, quite unexpectedly, the park phased out completely.

"You go through cycles in life," says Montgomery, watching Reverchon's treetops undulate outside his window. "Everybody looks at the park and says, 'It was always like this.'

"Well, it wasn't always this way. It went through the cycles."

A dark undercurrent was seething through the park as early as the 1970s, when knife fights, shootouts and occasional murders marred the roster of baseball games, celebrations and "slimnastics" classes.

In 1986, one of the undercover officers regularly patrolling the park was shot and his wristwatch stolen.

After the city cut back on maintenance during the 1980s recession, Reverchon's foliage grew thick and its reputation wild. Behind overgrown branches and thickets of Chinese privet, some men slept and others met for public sex. Criminals and addicts followed. Most everyone else stayed away.

"It became a horrible place to go," says Ashmore - who wouldn't set foot there in the '90s. "You used to see people in sleeping bags, in just terrible conditions."

By 1998, Montgomery had spent more than a decade watching the park outside his window turn into a crime scene. When he learned a 3.5-mile hiking path called the Katy Trail was being constructed alongside the park, he saw a chance to reclaim Reverchon.

Laughing, he remembers telling his plan to the assistant police chief:

"I said, 'We're gonna go down there and have an Easter egg hunt and chase everybody out.' He said, 'You're out of your mind - Easter egg hunts are not going to work.'"

Less than a year later, several hundred volunteers descended on the park, cutting brush and hauling out trash by the truckload.

When they finally cleared their way to the stonework on the hill, Montgomery was amazed - he had forgotten it existed.

"You gotta remember: The future's always gonna change, just like the park," says Montgomery, who has yet to hold his Easter egg hunt - but now turns his patients loose in the park for Farm and Ranch Day every spring.

The original cleanup has become an annual event, which police say is one reason no serious crimes have been reported at the park in at least six years.

In 2005, Ashmore - who not only walks in the park again but has a law office across the street - joined the Friends of Reverchon Park. So did Montgomery.

The first thing the group did was draw up a master plan - a sort of 12-step program to rehabilitate the park.

Counting mostly on private funds, the $15 million plan envisions a baseball diamond returned to its former glory, a redesign of the '70s-era recreation center and the restoration of the old artesian well (which, this time, will flow with city water).

Already, Reverchon has gained a new playground, brighter lights at the ball field, and, last year, a proper connection to the Katy Trail. A couple months ago, a seedy parking lot that marred the park's front entrance was turned into a meadow. This summer volunteers will replant the sunken iris garden - which for decades had been mistaken for an amphitheater. 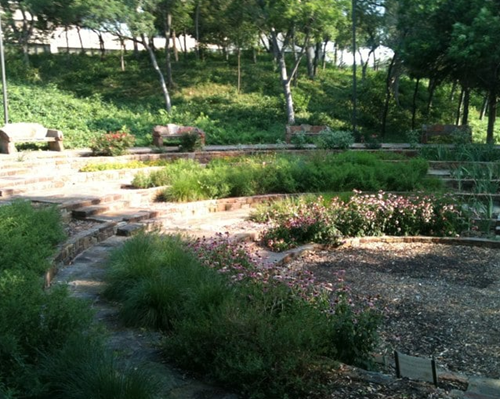 Next year, the city will begin restoring the stonework on the hill. In the meantime, those old pillars and picnic tables continue to collect their little dedications:

The most recent are written in chalk - no older than the latest rainfall.

On a particular Wednesday, on a table already scarred by generations, someone had drawn three big hearts in standard variations: one pierced, one cracked, one perfect.

TIMELINE: REVERCHON THROUGH THE YEARS

1915: The park is founded on "Woodchuck Hill," straddling Turtle Creek.

1935-1937: The Works Progress Administration adds a sunken iris garden, stonework and other improvements.

1980s, 1990s: As city maintenance funds dry up and visitors turn away, the park becomes a haven for crime and drugs.

1998: 400 volunteers participate in the first cleanup.

2002: Hundreds of orthopedic surgeons in town for a conference build a playground in a single day.

2005: Friends of Reverchon Park is established, and the group drafts a master plan for the park.

2007: Lights at the baseball field are upgraded to collegiate standards.

2008: A ramp is built connecting the park to the Katy Trail.

2010: The iris garden expected to be replanted in August.

2011: Hillside stonework is set for restoration by the city.

Mr. Selk is a reporter for The Washington Post and was previously with The Dallas Morning News.