Oak Wilt is a complex disease. To fully explain its impact on our trees requires several consecutive articles. Conflicting information in public venues adds to the current Oak Wilt confusion and creates anxiety or anger over the potential loss of a favorite tree. If Grandpa planted the tree, or it screens the neighbors and reduces your energy bill, the tree has special value. It is no longer just a renewable resource easily replaced. Best not to mess with a Texan’s trees!

Although Oak Wilt research is somewhat limited, a good understanding of what is known offers some level of comfort. Dr. David Appel, Professor of Plant Pathology and Microbiology at Texas A&M University, is recognized as an expert on the subject. His research has been peer reviewed and his guidance helped to develop the standards covered in this article as well as other plant pathologists with extensive Oak Wilt experience. The disease is not rampant or terrorizing all our neighborhoods and was first discovered in the Dallas/Fort Worth area in 1978. Let’s keep things in perspective and rely on those who have worked with, managed, and tracked the spread of the disease as a career.

Oak Wilt and Its Symptoms

Oak Wilt is a vascular wilt disease of Oak trees caused by the fungus, Ceratocystis fagacearum. The fungus enters the tree and stops the flow of water as well as elements by plugging the vessels in the vascular system. All species of Oaks are susceptible, with some species being somewhat tolerant. Red Oaks, both Shumard and Spanish, are highly susceptible to the pathogen. Live Oaks (Quercus fusiformis and Quercus virginiana) follow as a close second. Oaks in the White Oak family, such as Bur Oak (Quercus macrocarpa) or Chinquapin Oak (Quercus muehlenbergii), are more tolerant of an infection.

In the Red Oak family, the disease expresses itself in two primary ways. The first symptom is an oily green appearance in sections of the tree’s canopy, which rapidly turns a tan or red color. The second, and less common expression, is a heavy and rapid shedding of foliage with individual leaves displaying the symptoms previously mentioned. Infected Red Oaks typically die within a few months of infection. 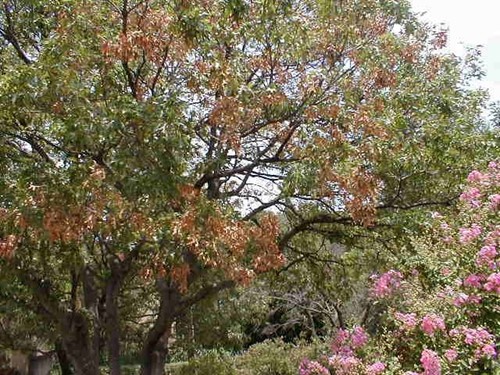 Infected Live Oaks display a variety of foliar symptoms. The most common is called veinal necrosis, a yellowing/browning of the leaf midrib and side veins. 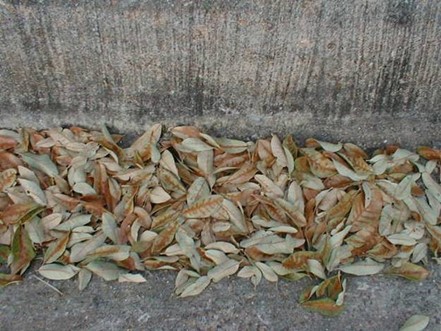 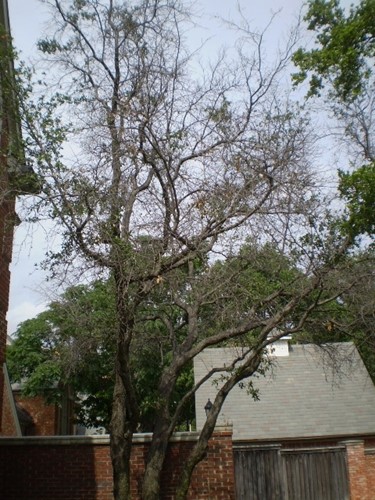 Affected foliage usually drops as this symptom appears, but it is common for symptomatic foliage to remain on the tree. Defoliation of Live Oak trees can occur at anytime of the year, but should not be confused with the normal process of leaf-drop and flowering that generally occurs in February and March. Live Oaks typically die within six months of infection with some individuals not dying for years. Advanced training is required to accurately diagnose and properly treat the disease. Uneducated or inexperienced advice can be very costly.

Oak Wilt most frequently spreads from tree-to-tree by root-to-root contact. Live Oaks regularly form functional root grafts with other Live Oaks. Red Oaks appear to form these grafts as well. Oaks like to be “hooked-up” with each other and swap spit. Kidding aside, once the pathogen has entered one tree, it has the potential to move from tree-to-tree quite readily and efficiently. Root grafting is known to occur between Live Oaks and Red Oaks. This phenomenon is not common, but research indicates the potential exists.

Although infrequent, a second method of disease transmission is by overland spread. This occurs when fungal spore mats are produced on a dying Red Oak and visited by the suspected insect vector or transmitter, the sap-feeding Nitidulid Beetle. The beetle can carry the spores to a wound on a nearby tree, but the spores can only infect the tree if the wound was fresh and created in the previous 24 to 48 hours. All Oaks, including Live Oaks and species in the Red Oak family, can be infected by overland spread or root-to-root contact.

It should be noted that fungal mats are produced primarily in the spring or cooler times of the year, and only on infected Red Oaks in a particular stage of decline. Fungal mats are viable, that is producing spores, for a short period--usually two to three weeks at most. Although new infection centers do form, it is not fully understood whether it is from the insect spreading the disease, or other methods of transmission not yet discovered or researched.

If you have questions, remember there is more to follow next month, on this thrilling subject!

To continue learning about Oak Wilt, click here for Part Two of this article.