Designation in the Hands of Indian Nation Leaders

Steve Houser, owner of Arborilogical Services and board of trustee of the Texas Historic Tree Coalition examines the Holliday tree. Photo by Ken Fibbe of Times Record News.

Steve Houser uses a rope and pulley contraption to climb the Holliday tree to examine inner rings of cut branches and collect samples of deadwood. Houser said it is highly likely that the tree is an Indian marker tree, and he plans to present his findings and other expert data to an Indian tribe to try to get it officially proclaimed as one. 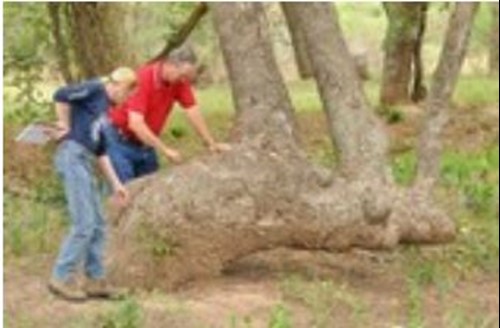 Holliday resident and marker tree enthusiast Don Briix (right) shows veteran arborist Steve Houser scar lines on the trunk of the Holliday tree on Tuesday. It was one of several stops Houser made that day to various locations in North Texas to check on potential marker tree discoveries.

Houser is a founding member of the Dallas Historic Tree Coalition (DHTC), and researches trees he believes provide strong evidence to be Indian markers.

The more I see it, the more I feel like it is a marker tree, a helmet-strapped Houser said as he used a rope and pulley contraption to scale the tree and count ring circles from cut dead limbs.

Research on area Indian occupation, tree age and documentation of bend-styles is just some of the necessary information needed to be presented to an Indian tribe the only source that can officially proclaim it as their marker tree. Once that happens, it instantly becomes a living historical monument.

The Holliday tree located at Stonewall Jackson Camp No. 249 about 85 yards south of the United Confederate Veterans Monument, near a stream behind the baseball field is in the beginning stages of that process, with Houser's new measurements kicking off the months-long research process.

The Times Record News published an article about the tree March 21, and since then Houser said the DHTC has received numerous emails from tree-owners and sightseeing patrons believing they know of trees that fit the description.

Tuesday, Houser went on what he called a scouting trip to examine some of these new discoveries in North Texas, stopping by to measure and photograph potential marker trees in Bowie, Lake Kiowa, New Castle, and Holliday.

The one in Bowie is just unbelievable, he said. It's a mulberry tree that is bent at almost a right angle, starting at five feet above the ground. It then bends again at a V-shape, and wraps around and lands on top itself and it has three different root systems. I don't know if its a marker tree, but I'll be really interested to find out.

He also plans to examine several more cases in places like Weatherford, Tyler, and Gordonville.

I document all I can from the arborist perspective and present my findings, along with information from anthropologists and other experts, to the tribal elders, he said. Then it's in their hands and they make the ultimate decision to proclaim it or not.

They received a similar stamp of approval in 1997 from Comanche Indian Tribe Chairman Wallace E. Coffey, who gave an official blessing at a formal ceremony of a marker tree at Gateway Park in Dallas.

But one year later the tree blew over in a Memorial Day storm.

The more we get proclaimed, the more people will realize that this isn't something we are up. This is real, he said. The evidence is there. The Indians know about them and talk about them. We just need to get as many examples as we can to them before they start to disappear and get cut down.

Houser used diameter tape to measure its base, counted the tree rings from several dead limb samples to ballpark its age and took numerous pictures of its knobs, scar-lines and severe bend three features that appear frequently in marker trees.

The findings will be analyzed by the DHTC team, which is made up of master naturalists, master gardeners and citizen forester volunteers, some of whom will do their own in-person follow-up examinations on Housers multicity tree research in the next few months.

It would all be for naught if a tribal elder wouldn't look at their info.

But Houser said he knows a friendly way to try get them to consider it.

You don't just give them money and tell them to come out and see the tree, he said. Usually, you present them with some kind of gesture, like a gift. We were thinking of (the Comanche Nation elders) a collage of pictures of marker trees.

On their side is Robert Atchavit, an 80-year-old Wichita Falls resident who is of full-blooded Comanche Indian descent. His mother belonged to a Penteka Comanche band called The Honey Eaters.

He said he would be willing to take the information Houser and his team gather and present it to the Comanche Nation, whose headquarters are in Lawton, Okla.

This tree is amazing, Atchavit said. We were a people that loved nature. And if this turns out to be a marker tree, then it is important that our tribe, or whatever tribe it belongs to, recognizes it, because it represents a big part of a Native Americans life.

Atchavit said the man who used to conduct the Comanche Nations production and blessing ceremonies recently died and the tribe is likely currently looking to fill his shoes.

Once they do, I will work with Steve (Houser) in any way I can to get the tree looked at, he said. My tribe went through a lot of turmoil and it would be nice to have this living memorial recognized here (in Holliday) to honor them.

Tuesday, Houser collected background information at the Holliday tree site from Atchavit and Don Briix, the latter a Holliday resident and marker tree enthusiast who originally discovered the tree and sent photos of it into the Times Record News a few months back, sparking the article.

Briix has also been in frequent contact with the DHTC as well as local museum curators and historians, trying to figure out which tribe might have bent the tree.
I think they are fascinating, he said.

Since the end of March, he said he has conducted much more marker tree research, including visits to an Indian marker tree in Coldwater, Mich., and two in Burnet, Texas.
He said he has helped and will continue to help contribute to the DHTC project in any way he can.

It's my desire to honor the Native Americans that were here before us, Briix said. And I know that they were very close to nature, so I know that this tree would be very significant to them. I'm excited to see where the research leads.

To see the typical characteristics of a marker tree, as noted by anthropologist and Comanche marker tree researcher Linda Pelon, visit this article online and click on the How to Identify a Marker Tree link.