Arborist Steve Houser (right) and homeowner Suzanne Sudduth discuss the condition of the trees on her property on Sept. 21 in Dallas. Photo by LM Otero.

Rain that fell across a large swath of parched Texas the past week has snapped a seven-month streak of precipitation amounts that were among each month's ten driest on record.

For Tyler, Wednesday's storms deposited an almost trivial amount of rain on the area. The National Weather Service recorded just over half an inch - 52 hundredths - at Tyler Pounds Regional Airport.

National Weather Service forecaster Marty Mayeaux said that leaves the region more than 19 inches behind the average for the year and there is little hope that more will fall anytime soon. In fact, the next slim chance for rain is for next Tuesday, he said.

Fall cool fronts bring storms and more moisture through the area, Mayeaux said, but it doesn't look like the relief will be enough to break the drought.

"The long term is showing drier-than-normal (conditions)," he said.

With the cool fronts, there may be some increased chances for rain from hurricanes, as the season doesn't end until November, but it is difficult to forecast if that will have a significant impact, he said.

For the time being, temperatures are expected to remain in the mid-80s for the rest of the week, with lows dropping into the 50s, he said. 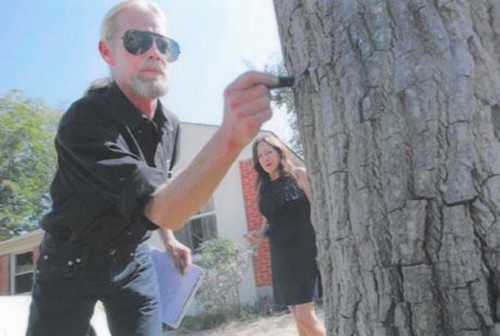 Mayeaux said starting next Tuesday, highs could even be in the 70s as another front moves into the area.

National Weather Service meteorologist Victor Murphy said Wednesday he estimated Texas got an average of about two inches of rain in October, about half an inch shy of the normal average for the entire month.

Those two inches are just less than a quarter of the statewide average for the year - 8.59 inches.

The rainfall average in the first nine months was about 25 percent less than the same period in 1956, the previous driest year when 11.23 inches fell.

Rainfall in each month from March through September was among the ten driest for that month dating to 1895.

From Staff and Wire Reports with the Tyler Morning Telegraph.