The light blue-green foliage of Arizona Cypress trees planted in the 1930s is giving way to recent cultivar introductions of grey and silver. All photos provided by Arborilogical Services.

Texas gardens are blessed to have a large variety of trees suited for our climate and soils. If there is one group of trees where we might be short-changed, it is the conifers.  In the majority of the state, growing Spruce, Fir, and Balsam is but a pipedream. Between scorching summers and incompatible soils, many conifers struggle to survive a single season. Even Japanese Black Pines, a staple in Texas landscapes since the 1960s, show a steady decline.  Masterfully marketed to be planted in threes, fives, and sevens, few of the odd-numbered plantings remain intact. This year, we have seen the feathery, grey-green foliage of Leyland Cypress turn brown and droop from a combination of heat stress and a fungal disease that has no successful management. Another conifer is moved from the “To Plant List” to the “Don’t Plant List”.

The silver lining to be found in a year full of horticultural disappointment is to look for those trees, and particularly the conifers, that appear to take the stress unscathed.  They are there if you watch for them. Some of these trees may seem to be old-hat, but are showing that they are trees that may deserve more respect than what they have been given. Others are waiting to be discovered for what they can be. 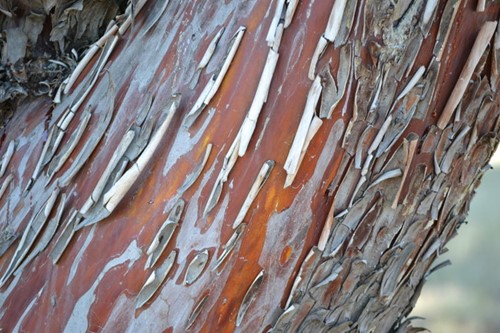 Easily recognized by a combination of peeling and iridescent bark, Arizona Cypress trees create a special interest in the landscape.

Arizona Cypress (Cupressus arizonica) best fits the first group. Native to the Trans-Pecos region of the state, this conifer has worth in a landscape if only for its remarkable bark. It has an exfoliating trunk that reveals an underlying tissue of copper, bronze and gold--iridescent colors rivaling those found on a butterfly’s wings.  Should you choose to add an Arizona Cypress to your landscape, you will need to be patient to see the development of the showy trunk, as it is a moderate grower.  However, the nursery industry has rediscovered this tree’s importance, and has selected a number of cultivars based on an assortment of foliage colors that range from silver to blue-grey. Mature Arizona Cypress can be found in residential landscapes and park plantings from the 1930s and 1940s. While their culture tolerates poor soils, Arizona Cypress become their best when planted where drainage is nothing short of excellent. Likewise, they need full sun from the day they are planted until they mature. 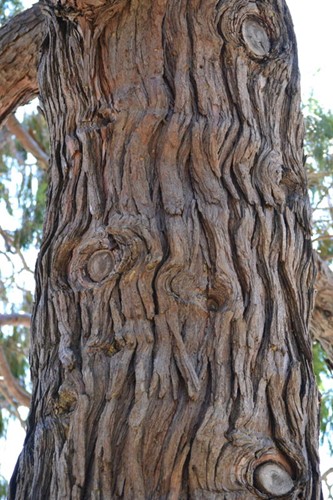 Waiting to be discovered is California Incense Cedar (Calocedrus decurrens). Native to the more arid regions of Oregon, California, and western portions of Nevada, Incense Cedar is an almost unknown conifer that began proving itself in the Texas landscape more than 100 years ago. Its bright green, scale-like foliage is soft to the touch, differentiating it from many upright junipers. When mature, it produces a quirky drooping cone containing a single seed. The bark is a reddish-brown and deeply furrowed. In fact, the bark is so stylized, you might think the patterns of twists and turns inspired Van Gogh’s painting style. As a testament to its tolerance of extreme weather and pour soils, one of the oldest known Incense Cedars humbly stands in a Garland, Texas pioneer cemetery. This tree has held its place for over a century.  California Incense Cedar is not readily available in garden centers, but nurseries that specialize in unique plants can order them for you. 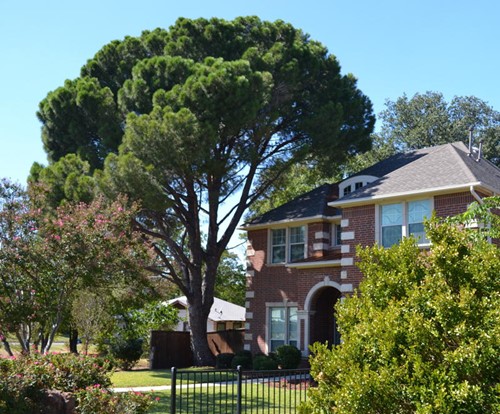 This Italian Stone Pine has developed a broadening canopy large enough to shade this two-story home’s roof and western exposure.

Early Texas plantsmen recognized the similarities of our climate and soils to those of the European Mediterranean. The introduction of trees that could adapt in Texas was the logical next step in their grand experiment. As a result, we have Italian Stone Pine (Pinus pinea). Known for its picturesque silhouette, this pine is suited for the thin rocky soils and infrequent rains that East Texas pines will not tolerate. Mature Italian Stone Pines are somewhat lost in the summer urban canopies of San Antonio and Austin, but take their deserved place in the winter landscape. As they grow, their shape morphs from a loose coned-shaped ornamental to a broad canopied shade tree.  Juvenile growth can be rapid, but the growth rate of mature trees is measured. Winter hardiness of Italian Stone Pines has long been a topic of debate. Young trees produce juvenile foliage of short, single bundled needles, which are completely uncharacteristic of the long paired needles of mature foliage. It is believed that the juvenile growth does not have the same cold tolerance level as mature growth. Should that be the case, it would make sense to plant nursery stock that has grown into its mature phase foliage. Established Italian Stone Pines grace Texas landscape as far north as Denton.

While this is only three trees to place on the “To Plant List”, the point is this: based on some simple observations, the list of conifers can be much larger than we might have first considered.

Mr. Seaman is a sixth generation Texan, degreed horticulturist, and a retired member of the certified arborist team at Arborilogical Services, “The Experts Your Trees Deserve.”®