'The Pecan is Practically an Orchard by Itself': Giant Among Trees Loses Crown

No amount of rooting can restore distinction to Texas specimen.

WEATHERFORD - Billy Finch has one tough Pecan tree. You name it - from pernicious weather to sap-thirsty insects - nothin has beaten that tree.

Nothing, that is, until a Tennessee Pecan tree one-upped the defending champion from Texas.

"You gotta be kidding!" exclaimed local arborist Steve Houser upon hearing the news.

The Pecan, after all, has been Texas' state tree since 1919; Governor James Hogg loved the sturdy giants so much that he asked that one be planted at his gravesite. Heck, they're all over the Alamo.

Truth is, Texas and Tennessee have grappled for the Pecan championship for years, said Karen Fedor of the nonprofit conservation organization American Forests, which has chronicled the nation's biggest trees since 1940. The new champ has been nominated before, but there was "some controversy surrounding the Tennessee tree because it was thought to be a Black Walnut," she said. "However, it was confirmed to be a Pecan, remeasured and renominated in 2001."

As tree lovers celebrated National Arbor Day on Friday, though, some can set aside regional rivalries.

"Even though it's our state tree, Pecans are important trees in many states, especially in the Eastern United States," said Dallas urban forester Courtney Blevins, who maintains the Texas Forest Service records for the biggest local trees.

There, they even pronounce it like we do - pe-CAHN, not PEE-can. 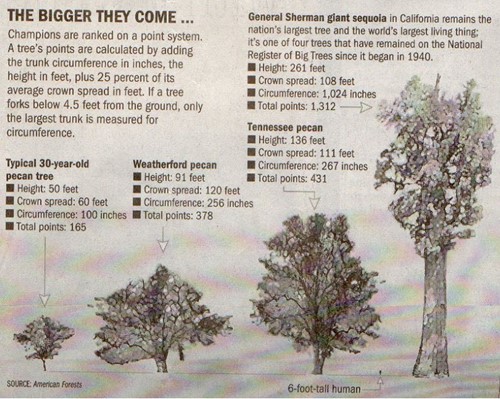 BIG TREES BY THE NUMBERS

The easiest national champion ot see nearby: Common Jujube, at the Fort Worth Botanical Garden. It's 46 feet tall, with a 64-inch circumference and a 36-foot spread; 119 total points.

Most difficult national champion tree to see in Texas: Huisache, inside the grounds of the Atascosa County Jail. It's 30 feet tall with a 161-inch circumference and 46-foot spread; 203 total points.

How did Arizona pass us? How big can their trees be when it never rains there? Answer: They have many specimens that are unique to the state (as does Texas).

Could a new champion be in your back yard? More than 90 tree species have no recognized champions, including the Texas Hawthorn, Texas Forestiera, Texas Kidneywood and Texas Pistache.

Silliest excuse for a national champion tree: Saguaro. Who let Arizona get away with this? Sure, it's 50 feet tall, but is it a tree? Disqualify this species and Texas is back in third place (but who's countying?).

Mr. Peters is a staff writer for The Dallas Morning News.