It’s not certain when it was born, nor is there a ﬁrm date for its death.

The acorn which gave it life probably was buried in the nourishing earth by a squirrel or a bird.  Its age at death was estimated to be approximately 179 years, based on trunk rings.

Scientiﬁcally, the Red Oak was Quercus Shumardi, but it was known familiarly as the Cemetery Oak. It was at its splendid best in 1995, at nearly 70 feet tall, with a crown spread of 95 feet and a trunk circumference of more than 14 feet at chest height (4 1/2 feet from the ground).

That was the year the Texas Forest Service designated it as Metroplex Champion, calling it the largest of the species known in all of Dallas, Tarrant and eight adjoining counties.

Its death of Ganoderma applanatum, a wood decay fungus, after a long illness, came at the spot where it ﬁrst saw life, a tract of land now known as the historic Knights of Pythias Cemetery at South Garland Avenue near Miller Road.

Surviving is its longtime companion, the Incense Cedar (Libocedrus decurrens), a 63-foot tall tree with a crown spread of 29 feet and a trunk circumference of 90 inches at chest height.

That tree is also distinguished -- in 1998, it was named the Texas Forest Service State Champion -- no other tree of its kind was registered in Texas. TFS said its origin is uncertain because its kind is native to the U.S. Paciﬁc Coast.  Legend has it that W.B. Bell planted the seeds, possibly brought from California by cousins, near the family plot around 1932.

The Knights of Pythias fraternal order began developing the acreage as a cemetery around 1900, when the oak already was almost 70 years old. The cemetery now is maintained by the Garland Mills Cemetery Foundation.

Limbs had been removed from the tree for a period of months to prevent dead wood from falling onto traﬃc lanes on nearby South Garland Avenue.

Steve Houser of Arborilogical Services in Wylie had helped care for the tree for several years.  In recent months, a core sampling had shown the tree's trunk to be hollow, and it was removed over several days in November. 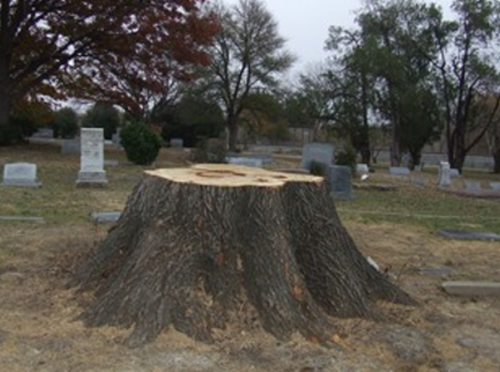 Its huge stump serves as monument to the Cemetery Oak. Photo by Bob Compton.

Arborists left a stump more than three feet high, which preservationists hope can be treated so that the rings that measure its life span can be counted by visitors.

An informational marker detailing the history of the oak and the cedar, and citing their uniqueness was installed near the Cemetery Oak a few years ago.

'On Track' is the quarterly newsletter of the Garland Landmark Society.