In Friday's Storm, the More Glorious the Foliage, the More Vulnerable the Tree 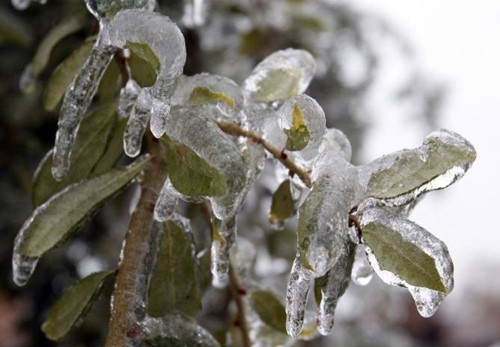 One forester said to give a tree a day or two to see how it responds to the thaw. 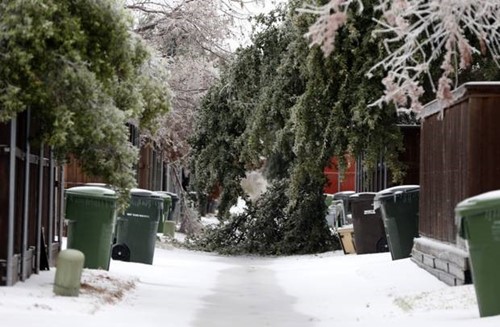 A tree blocks an alley in Plano.

This year’s fall color came crashing down Friday in the blast of winter weather. In fact, arborists say, the lingering autumn leaves may have made things worse.

“With the warm weather, some trees were holding their leaves longer, and that made them more vulnerable to ice,” said Steve Houser, president of Arborilogical Services, a Dallas tree care company.

More leaves meant more surface area for ice. More ice meant more weight. More weight may have meant the brightly colored oak that looked so beautiful earlier this week was brought down in the middle of your driveway.

Friday’s ice storm dealt damage to more than trees. The foul weather fouled up electricity and plumbing, with the potential for further damages lingering through the weekend.

Those were the obvious cases. Even if there is no apparent water flow, be on the lookout for wet spots in the drywall over the next few days, she said. Faucets on the north side of the house are particularly vulnerable.

“One night of cold usually doesn’t hurt, but I’d be concerned about the next couple of days,” she said.

The traditional advice to turn on a faucet to allow a slow trickle of water is a good way to prevent freezing, she said. Be sure to open kitchen or bathroom doors that hide plumbing — laundry room doors included.

If you’re still without electricity, most of the advice is obvious — whip out the blankets, sweaters, coats and anything else to bundle up. If you have a fireplace, use it safely.

Also, stay hydrated so you don’t get hypothermia. If you go somewhere that permits access to electrical power, use it to keep your cell phone charged.

As for trees, many were already weakened by drought and susceptible to ice damage, said Andrew Rhoads, a Dallas-area arborist.

“Trees that were pruned and were well-watered probably did best, but brittleness caused by the drought increased the damage,” he said. “Unfortunately, there’s not a lot you can do about it now.”

Some of the pruning, however well intentioned, may have added to the problem. Some owners cut away foliage at the center of the tree, leaving bunches of leaves at the tips. The process — known as lion-tailing — dangerously unbalances a tree in an ice storm.

“That’s the saddest of them all,” said Harold Spiegel, president of Preservation Tree Service. “I call them broccoli trees, and they were particularly vulnerable to ice storms.”

As the cold continues this weekend, ice may not immediately melt from the trees. Karen Woodard, Dallas city forester, advises homeowners to be patient.

“Step away from the tree for 24 to 48 hours. If it’s not a danger, if it’s not blocking the street, leave it alone to see if it rises back up,” she said.

If the branch poses a danger, or is clearly broken, she cautions homeowners to call a professional tree removal service.

“With the tension on it, you don’t know what it’s going to do or how it’s going to twist when the weight is suddenly released,” Woodard said.

She also advises that pruning outer branches, rather than chopping off the entire limb, may be enough to save a portion that has suffered only minor damage.

IN THE KNOW: Surviving the cold

Preparing for power outages: Load up on jugs of water, extra batteries, candles, matches and flashlights. And have a plan B, such as staying with a friend or relative who has power.

When the power goes out: Report a power outage to Oncor by calling 888-313-4747, texting “OUT” to 66267 or going online to stormcenter.oncor.com. Bundle up with layers and blankets.

Fire safety: Don’t use your oven or stove to stay warm. Be sure your carbon monoxide detector is working if you have gas heat. Put plates under candles. Never leave fire unattended.

Defrosting the car: Start the car, turn on the defroster. Scrape ice as it softens. Don’t use hot water to break up ice.

Driving: Don’t drive unless it’s necessary. Try to only go out during the daytime when visibility is higher. If you do drive, drive slowly and keep the wheels straight. Go easy on the brakes and accelerator. Don’t try to stop suddenly. Try to stay in the ruts that are worn in the more heavily traveled streets. Change lanes smoothly. Look far ahead and do everything softly. And if at all possible, avoid stopping on hills.