The mighty Pecan tree is a true native Texan that is a real shining star within our state. Texans are rightfully proud of our Pecan trees, and we are often known to brag about their size — always bigger in Texas (of course). As a matter of fact, the largest individual tree found of a given species is registered and listed on a national, state, and local level (references below). For many years, a Pecan tree in Parker County was listed as a regional, state, and national champion — until it was “dethroned” a few years ago when another larger tree was found. It is still the state and regional champion, and it measures a whopping 84 inches in diameter, 118 feet in crown spread, and 87 feet in height. Those who search for and submit champion trees are officially listed along with the tree, and they are often called “big tree hunters.” If you find a tree bigger than the previous person, you bump him off the list (and you could be called something a bit different).

Texans’ love for Pecans runs very deep — to the point that we named it our state tree. Those who chose it as the state tree were clearly not plant taxonomists. The botanic name of Carya illinoensis was derived from where early settlers first found the tree — “nuts from Illinois.”

Pecan is in the Walnut family, and the leaves can be similar to those of Hickory and Walnut. Pecans are native to East Texas, as well as central parts of the state. They are primarily single-trunked trees that grow tall and quite wide. Native Pecan trees produce a small nut, some less than three quarter inch long, while selected varieties produce a much larger nut with thinner, easy-to-crack shells, referred to as “paper shells.” The native Pecans’ nuts are reported to be tastier than their varietal counterparts because of their higher oil content. They were an important food source for American Indians, as well as for wildlife that likely expanded the tree’s range over time. Texas pecan growers contribute significantly to the state’s agricultural economy. 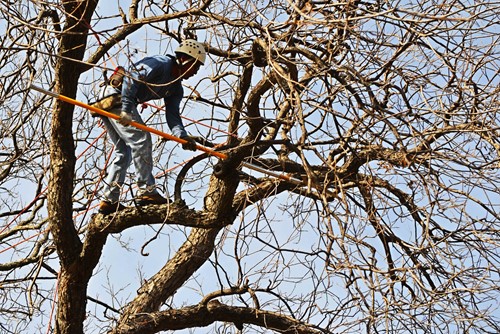 As with any tree species, a Pecan’s branching habit can be quite strong if, throughout its life, the tree is pruned by a knowledgeable arborist. Pecans are often reported to have brittle wood that leads to frequent limb or trunk breakage. However, the wood is strong. It is the weight of the pecan nuts on the ends of long limbs that can cause limb breakage or cracks in limbs that later break. The loss of limbs can be reduced by properly pruning foliage on the ends of longer limbs. Good physical and mental skills are required to climb safely out to the ends of long limbs. These tasks add to the cost of pruning. Weight reduction pruning is not “topping” a tree or cutting back a large amount of foliage to a stump. In addition, pruning practices that strip out interior foliage instead of reducing weight at the branches’ ends increases the likelihood of limb breakage. Such pruning practices may be less expensive, but they compromise the health of the tree and increase limb loss.

While Pecan trees may grow too large for some urban landscapes, the summer shade they provide, along with their valuable food crops, keeps them at the top of the preferred species list for Texas landscape trees.