Brad Ward, center, and Shelley Nicholson pose Monday with Steve Houser, founding member of the Dallas Historic Tree Coalition, in front of a tree in Gordonville that is believed to be a Comanche marker tree used by Native Americans to find their way along trails. Both Ward and Nicholson have found trees on their property and were recognized Wednesday with plaques of registry. Photo by Debra Hix.

92 year old Brad Ward and Shelley Nicholson of Gordonville,Texas were both recognized today by the Texas Historic Tree Coalition for having a Comanche Marker Tree on their property. They were both honored today and given plagues of registry by Steve Houser founding member of the Dallas Historic Tree Coalition.  Mr. Ward had discovered the unusually  shaped tree on his wife's family property in 1947 and then they moved onto the property in 1981. Mr. Ward had spent a lot of time studying Oklahoma and Texas History and had became very interested in Indian Cultural, while researching an article on an Indian Marker Tree found in Holiday Texas, Ward begin looking at the tree in his own back yard which then lead him to calling a group named the  Georgia Mountain Stewards who referred him to the Dallas Historic Tree Coalition's  Mr. Houser who then looked at pictures of Wards tree and decided it needed to be examined. When examining a tree Mr. Houser first looks at how old the tree is, a tree must be at least a hundred and sixty years old, second they look at the direction the tree is pointing, it must be pointing to some sort of natural resources. Two other things Houser has to look at is Geotropism which is growing against gravity, has it been blown over and has started growing against gravity and second Phototropism which is growing to the light, trees have the ability to bend and lean to the available light. The Comanche Indians would bend sapling trees over and tie them with some sort of animal hide and this would make the tree grow to point in a direction to lead them to natural resources such as water supply's. They would make trails with these trees.  When Houser and a member of the Comanche Counsel examined Ward's tree he found it to be right at 159 years old and it was the right shape they look for and he decided that it apparently had been manipulated by the Indians to point east where there had been a natural spring that had run through before Highway 377 had been built. The two men then took their findings to the 18 member Comanche Counsel, in all these took around three years to complete. 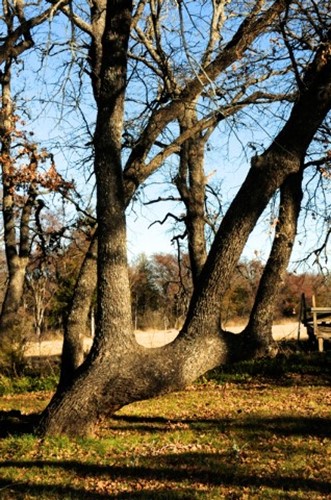 A tree in Gordonville that is believed to be a Comanche Marker Tree used by Native Americans to find their way along trail. Photo by Debra Hix.

While Ward waited for the answer from the Comanche tribe he thought it would be wonderful if he could find more Marker Tree's in this area, so he decided to put an article in the Whitesboro News Record asking people to look at the shape and direction of their trees, Ward received 38 pictures by mail and a few calls telling him where to look, all though very interesting looking trees none were marker trees. Then Ward got a call from a church member, Greg Anderson of Sadler who had been working out in Cedar Bayou in Gordonville , about 3 miles from Ward's Tree was another Marker Tree. Shelley Nicholson had noticed the tree in her front yard but did not realize she had a special Comanche Marker Tree, Ward then called Houser and he started the steps to certify Nicholson tree also. The Nicholson tree is approximately 150 years old and it points North toward a Natural Spring water source. Houser and the Comanche representative then gave their findings to the 18 member Comanche Counsel that meet in April of last year and they decided that both trees were official Comanche Marker Trees. In a ceremony honoring Ward and Nicholson at Wards home on Highway 377 near the 901 junction in Gordonville, Ward was awarded Certificate Number 2014-116 and Nicholson was Number 2014-117. Houser's said over the last 20 years he had looked at over 400 tress and of that number only 9 have actually been certified by the Comanche Tribe members making Ward's  #8 and Nicholson's #9. Wallace Coffey, Comanche Nation Tribal Elder Counsel Chairmen for the Comanche tribe recognized  the first tree in 1997 at Gateway Park in Dallas Texas, which opened the door for all of Houser's research and that is when he founded the Dallas Historic Tree Coalition and has volunteered his time for over 20 years.  But sadly the tree in Gateway Park has died, Houser said," most of these trees have not survived the droughts or have been cut down, which is very sad", he then went on to say,"the tree in Gateway park I tried to save by planting saplings around the root base of the tree hoping to give it a Tree IV, unfortunately my efforts did not breathe life back into this tree. Houser truly loves being one with nature, Houser said quoting the Indians. He then went on to say, "it is truly an honor to get to work so closely with the Comanche Indian tribe, I have so much respect for them because they deserve it".

Shelley Nicholson poses Monday with Steve Houser, founding member of the Dallas Historic Tree Coalition, in front of a tree in Gordonville that is believed to be a Comanche marker tree used by Native Americans to find their way along trail. Photo by Debra Hix.

Ward and Houser believe that there are many more trees to be found, so he urges everyone to be on the look out, keep your eyes open and send a photo to Steve.Houser@DHTC.org, who knows you might have a Comanche Tree Marker too. Ward would also like to thank all the people who sent photo's and called and a special thanks to Mr. Houser and the Comanche Leaders. 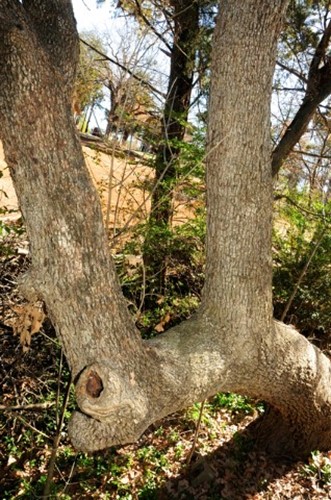 A tree in Gordonville that is believed to be a Comanche Marker Tree used by Native Americans to find their way along trails. Photo by Debra Hix.

Ms. Hix is a reporter for the Herald Democrat.