Imagine being a Comanche 150 years ago. You are traveling with your band, providing for your family, your horses, and preparing for upcoming days ahead. Your band comes across an area that has a fresh water supply, maybe from a natural spring, and it has an array of berries, pecans, and a good camping area. How would you remember this area?

When the Comanche's migrated into Texas around the 1750's, it was an open prairie, and according to the Comanche Nation Historical Preservation Director, Jimmy W. Arterberry, Comanche's would tie down or tether a variety of trees to modify its growing pattern and use it as a "marker," to be used as a reference guide on the landscape, such as a trail, a creek or spring for water, or a plush campsite.

One of these distinguished trees was given a Certificate of Authenticity by the Texas Historic Tree Coalition and placed on the Comanche Marker Tree Registry, after Don Briix contacted them about the unique looking tree. 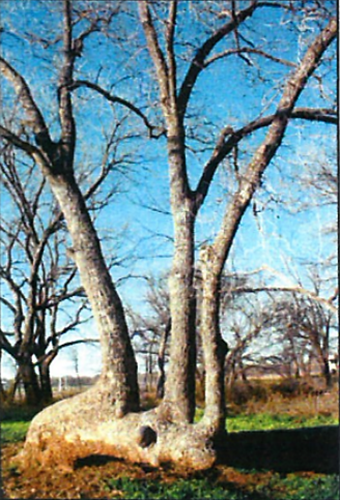 "I saw a tree similar to this tree in Colorado, and once I laid eyes on this one, I knew it was a marker tree," said Briix.

The designated tree, a Pecan tree, is said to be at least 159 years old, according to Steve Houser of the Texas Historic Tree Coalition. It is located at Stonewall Jackson Camp, east of Holliday, Texas.

Tribal Elder Robert Atchavit, who was a consultant during the examination of the tree, was also present at the February 9, 2015 Holiday City Council Meeting, where the dedication took place.

Steve Houser, center, holds the Certificate of Registrar from the Texas Historical Tree Coalition, which he presented to the City of Holliday's Mayor, Allen Moore, left, at the February 9, 2015 City Council Meeting. Also pictured are Don Briix, who discovered the marker tree, and Comanche Elder, Robert Atchavit, who contributed information about Comanche history.

"I am very honored to have been a part of this project," expressed Atchavit. "Hopefully, other Comche will come to see this tree we used. It is a historical marker for us."

The tree in Holliday, Texas is not the first tree identified as a Comanche Marker Tree in the Lone Star state.

In 1994, Chairman Wallace Coffey, and Juanitia Pahdopony Mithlo, along with the Texas Historic Tree Coalition identified a tree in the Dallas Gateway Park.

After Mithlo conducted research on the tree and contacted the Texas Historic Tree Coalition, a group of Comanche's traveled to Dallas to do a Tribal Proclamation about the ancient marker tree.

Another Comanche Marker Tree was discovered in the Davis Mountains in Davis, Texas, which was painted. A Cottonwood tree was painted along Limpia Creek, which inspired the name Painted Comanche Camp for local canyons because several paintings and pictographs were found on the canyon walls.

"Being nomadic people, these trees were our archaeological feature, like rock drawings," said Arterberry. Arterberry knows the importance of marker trees in Comanche history, and is currently documenting it in a book. He, along with Houser and Dr. Linda Palone are in process of publishing a book called "Comanche Marker Trees of Texas." It is currently under review with the Texas A&M Press. The book discusses the science behind the recognition of these trees, with taxonomy and a time line including pictures and historical data about Comanche Marker Trees.

Once the Texas Historic Tree Coalition collects the data, such as the species of the tree, measurement, location, history of property, and other research, the information is passed on to Arterberry. He then determines additional tribal factors, including the Comanche history.

"Some trees were painted or had hatchet marks, some were encrypted with messages for other Comanche to recognize and follow," said Arterberry. "They marked the location where Comanche's would meet. Some of the trees were chosen because the children were drawn to them."

Arterberry and his team broke the trees down to categories that include ititles such Ceremony, Medicine, Service, and Burial to name a few, and explains what additional needs the trees provided.

"For example, Comanche used the bark of Cottonwood trees for several purposes," he added. 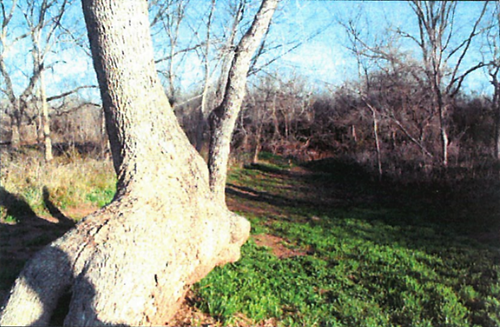 The Comanche Marker Tree in Holliday, Texas leans, almost points, toward a creek that was at one time a deep and flowing source of water.

Journalist Ann Jean Taylor had the opportunity to interview the late Mevin Kerchee Sr. in 1996 about marker trees (also called turning trees for her article titled "Searching for Turning Trees and Other Special Trees of the Comanche." Here is an excerpt:

"Kerchee learned of Turning Trees from his grandfather and other elders who spoke about the times before 1875, when the last of the Comanche surrendered to the US military. During those earlier days were special meeting places along the plains' edge, distinguished by good flowing springs and large or unusual looking trees known as Turning Trees.

There, as the tree shadows grew long and cool in the later part of the day, the Comanche's gathered to discuss what families and groups planned to do and where they would be. Some might plan to travel northwest to the mountains to gather lodge poles; others might intend to move southward to raid in Texas or Mexico.

Unfortunately, the exact location of the many places was not passed on. Kerchee observed that the Comanche custom of pointing out things or directions with one's lips (pointing with fingers is considered rude) added to this loss of knowledge. During the later-day auto drives through the Texas Panhandle-Plains. Kerchee's grandfather showed where certain Turning Trees were, pointing with is lips, leaving Kerchee with a somewhat vague impression of the place indicated.

A story related to a tree special to the Comanche was provided to anthropologist Dr. Thomas Kavanagh, who had interviewed a man (now deceased) whose mother was part of an Indian group taken hostage during a raid by army troops. During their return trip to the reservation, once the group was released after a few weeks in captivity, the at first was unsure of about their location. But, she saw a familiar tree, one to which her people had tied offerings, and knew where they were....Kavanagh things that several such trees existed throughout Comanche territory..."

"There are Comanche Marker Trees in New Mexico, Colorado and Wyoming as well," said Arterberry. "We are looking to find other trees in the other states too."