Did Native Americans Bend These Trees to Mark Trails?

As a kid, Dennis Downes was the type who played in the woods. The forests where he frolicked were near Lake Michigan, around where Wisconsin and Illinois meet. The spot is striking—in these woods, there are large, old trees that have contorted into incredible shapes.

No more than four or five feet off the ground, these trees bend sharply into right angles, parallel the earth for a measure, and turn sharply up again, towards the sky. These trees are now abandoned infrastructure. Like like other structural relics, they were designed to be long-lasting–so much so that some of these trees are still indicating the way. But the people they served have been forced to leave, and the marker trees themselves are in danger of disappearing.

Many people who come across trees like these in the forest share the same instinctive response: this can’t be natural. And as a kid, Downes was taught that they were not. The trees looked like that, he was told, because native tribes had purposefully shaped them to mark trails through the woods and across the water. “Having the knowledge of these trail trees could mean the difference between life and death, between eating and starving, between crossing the river correctly or incorrectly,” he says.

Downes, a sculptor and painter, comes from a family of doctors and scientists, and he wanted to back up the stories he’d been told about these markers with harder facts. As incredible as these trees seemed, ice, wind and other fallen trees can bend young saplings into dramatic shapes that they keep for their whole lives, without any intervention from humans.

Downes went in search of evidence showing that people had lifted this idea from nature and used it to create a navigational system of their own design. In his early 20s, he found his first clues: reports by a scientist working before World War II, who had studied and documented these trees. “I was determined to go everywhere he went,” Downes says now. But that was just the beginning of his research: he spent 28 years collecting information about “marker trees” before he published what he knew.

There are still skeptics who have trouble believing marker trees were made by humans. Even among the people most knowledgeable about these trees, there’s disagreement about how many true marker trees have been identified. But Downes and other researchers have found confirmation from historical accounts and photos and from the elders of Native American tribes that particular trees were used as navigational aides. 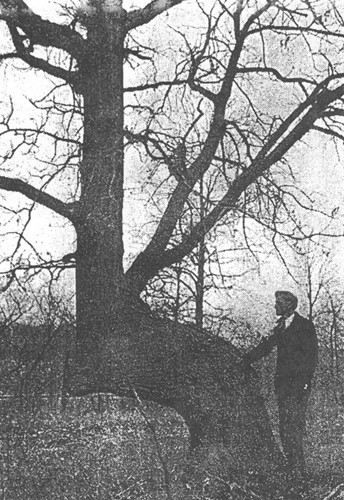 There are a few features that marker tree enthusiasts say can be used to distinguish them from naturally bent trees. They must, first of all, be old enough to have been alive when Native American tribes still lived in the area. The bend can’t be too far from the ground. They should indicate some sort of feature of the land, whether it’s a trail, a spring, or a place to ford a river. Trees bent in the same way, along a particular trail, might indicate human intervention.

Downes’ investigation into marker trees began with Raymond E. Janssen, a geologist who was working in Illinois in the 1930s and 1940s. Like Downes, Janssen was fascinated with bent trees. “The casual observer views them merely as deformed freaks; but careful observation and comparison of the nature of the deformities indicate that these trees did not acquire their strange shapes simply by accident,” he wrote, in one of four articles he penned on the subject.

One of these articles was Downes’ first clue that marker trees might be taken seriously as cultivated artifacts. Janssen had traveled to 13 states, trying to learn about marker trees, and he laid out some guidelines for distinguishing marker trees from trees naturally bent into weird shapes. And once Downes started trying to follow in Janssen’s footprints, he kept finding clues to follow–a plaque marking the spot where one tree had stood on the shores of Lake Michigan; a picture from an event sponsored by the wife of Harold Ickes, the Depression-era Secretary of the Interior; slides from the collection of a landscape architect, Richard Gloede, who designed Chicago’s Indian Boundary Park and was also a connoisseur of strangely shaped trees. 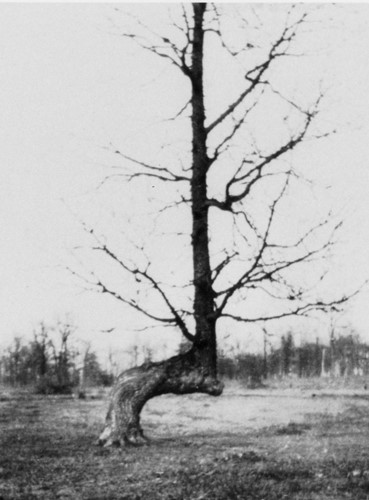 A 1880s photo of a marker tree in Illinois. Photo courtesy of Lakes Region Historical Society/Wikimedia.

Much of the older work documenting marker trees happened before World War II and before the interstate highway system swept through the country, which required cutting down forests—be they bent or not. One Native American historian told Downes that before the concrete roads came through, it was much more common to find marker trees in Illinois and Wisconsin, for instance. By the time Downes started rediscovering them, even more had been lost. At one point, there were at least 11 bent trees along a trail that went from the shores of Lake Michigan to Skokie, Illinois, around a swampy area. When Janssen was writing, seven of those remained. Some of those seven have since died.

Perhaps the best evidence for man-made marker trees comes from tribal elders. In one case, for example, Earl Otchingwanigan, a professor emeritus and Smithsonian consultant, showed Downes a marker tree that had been created in 1933, by two men who had been 70 at the time–old enough to have at least learned the practice from people who might have shaped original marker trees.

It’s stories like these that most convince marker trail enthusiasts that at least some of the bent trees in American forests were shaped that ways on purpose.

“There are still skeptics out there, mostly in the academic community,” says Don Wells, whose Mountain Stewards began finding marker trees in Georgia around 2003. “I've talked to enough elders, that I know what the truth is. I just ignore them.”

Wells’ group used to bore into marker trees to try to establish their ages–to prove they’re old enough to have been shaped by native people–but, he says, has stopped, after tribal elders asked them not to. (It’s considered disrespectful to the trees, and there are other ways to establish that a tree is old enough to qualify.) More important than the age of the tree, though, is any evidence of people living in the area before white settlers came through. The Texas Historic Tree Coalition collects information on age, species, shapes, and context of trees before presenting its evidence to the Comanche Nation and seeking official recognition of a marker tree.

There are many, many more bent trees in the world than there are trees that meet these criteria. Steve Houser, the arborist who leads the Texas group’s efforts, says that over about two decades of work, he’s had around 450 potential marker trees brought to his attention. Of those, only about 155 merited further investigation, and only a handful of those received official recognition.

For the marker tree enthusiasts, that level of scrutiny is necessary to combat skeptics who are not convinced these trees have any special purpose.

“I will not say every bent tree in the forest is a trail marker tree,” says Downes. “If there are only a few hundred of these unique living artifacts left, that's enough.” 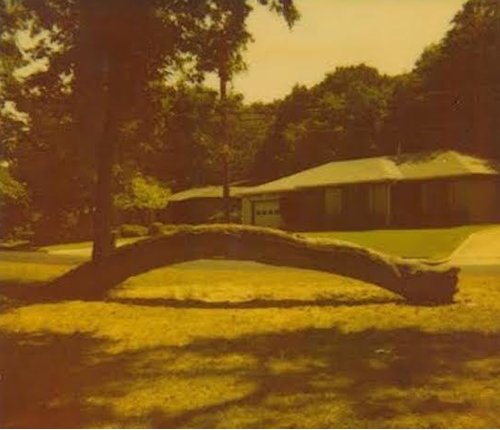 The Texas tree, after it was damaged. Photo by Steve Houser.

That number is dwindling, though. These trees are not legally protected in any way, and, even if humans leave them in peace, age is creeping up on them. One of the trees that the Texas coalition had officially recognized in 1996 was damaged the very next year. The tree had originally touched the ground and grown upwards, but over Memorial Day in 1997, a storm broke its vertical trunk. All that was left was an unusual beam of tree, arced horizontally to the ground.

Ms. Laskow is a senior writer @atlasobscura. She is enthusiastic about plants, cities, and other strange things.