Disease, pests, storms and bulldozers threaten to kill the last living witnesses to Comanches ranging throughout the state, so Dallas-based arborist Steve Houser is on a mission to document their existence before they disappear.

His book, Comanche Marker Trees of Texas, published by Texas A&M University Press, was released last fall and is the first publication that scientifically verifies the existence of the legendary arching trees that the Comanches used to mark trails, point to springs and signify important locations.

The book draws on the knowledge of three experts who come to the topic from different perspectives: Houser, an arborist with more than 35 years of experience; Jimmy Arterberry, the tribal historic preservation officer for the Comanche Nation in Oklahoma; and Linda Pelon, a professor of anthropology at McLennan Community College in Waco. Their collaboration began in the late 1990s when the first Comanche marker tree was recognized in Dallas’ Gateway Park.

Representing more than 20 years of research and fieldwork and taking four years to write, the book presents the characteristics and significance of marker trees and details the six genuine Native American marker trees recognized by the Comanche Nation so far; all of which are in North Texas.

Shaped while they were still saplings, the marker trees now bend along the ground for long spans and sometimes shoot straight up in a 90-degree angle at the end of a long, horizontal bow. The Comanches are now gone, but the trees remain as natural treasures and cultural relics that are more than 150 years old.

“One of the trees we showcase in the book is along the Bird’s Fort Trail in Irving. It marked a low water crossing on the Trinity River which would have been very important 200 years ago. If you crossed the river in the wrong place, you could lose all your supplies or maybe even drown,” Houser says. “This tree grows along the ground for about 15 to 18 feet and then sprouts upwards from there. So it was a tree that was bent to grow along the ground. 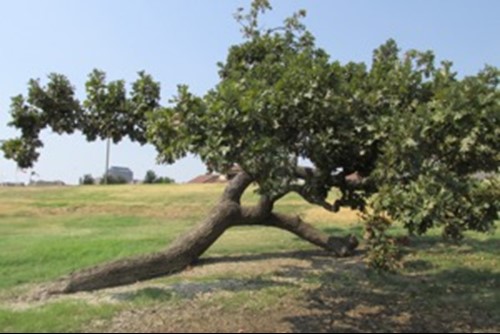 “On the other side of the river, the other marker on the opposite side of the low water crossing is pecan with an arching bow in the trunk that touches the ground and then grows upwards with two different arms. So it's a fairly unique shape of tree.”

The book is also the first to build a marker tree taxonomy that categorizes the various purposes of these natural structures, Houser says.

“We started with the top level of trees that are recognized are one of four different kinds: they're either a burial tree, a ceremonial tree, a marker tree or a service tree. And each one of those is broken down into specific areas such as a trail marker, or a treaty, a council tree or a medicinal trees; there are multiple categories.”

Houser, a founder of the Texas Historic Tree Coalition, says there may be hundreds of Comanche marker trees in Texas that have yet to be discovered. Evaluating a suspected marker tree involves a complex process of verifying that the Comanches once inhabited the area where the tree grows and ruling out natural causes for the unusual shape of the tree. 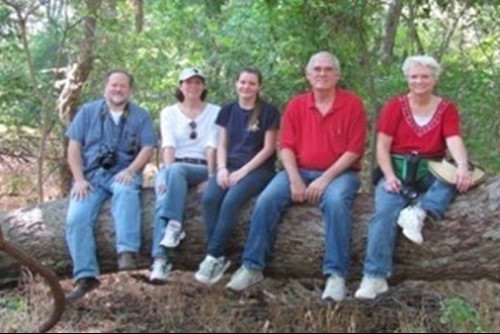 “Sometimes a branch from one tree can fall onto another tree and bend it into a natural shape which is easy for me to determine. It’s not uncommon to find trees in floodplains that have bent over, but if it’s a pretty good sized tree you’ll see roots sticking up from the ground somewhat,” Houser says of the imposters. “It’s only the ones that show promise that we take the time to go out and look at and go around the state to record the information.”

Once a tree passes the first round of investigation, the research process includes going back to the original land grant of the property and following the ownership of the land around the time when Comanches may have lived in the area. Using a topographical map can shed light on on whether there may have been a reason for the Comanches to mark the spot.

“As good example, a few years ago a lady spoke to me about a tree and she said that it points to a hill, and it's one of the highest points around, but there's nothing on it.

“So I said, ‘Go up there and see what you see on the top of the hill and look closely at the ground, and especially at the rocks.’ She called me back pretty excited because what she had found was flint rock, and rocks that they would have used for a fire. You’ve got to remember: they didn't have cell phones. They had smoke signals, so high points were very important to a smoke signaler. And the fact that she found all these flint rocks up on the top gave it credibility because the tree was probably pointing to this smoke signal area.”

Houser says the book is generating interest among anthropologists and historians who are exploring whether other Native American peoples may have used marker trees. Houser’s work concentrates on the Comanches because they are well-documented as having migrated from the north down into Texas and even Mexico. 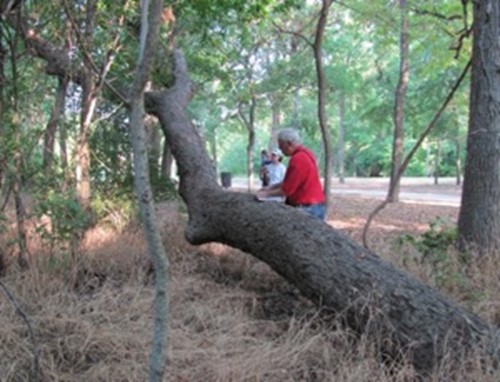 The book provides information on how to evaluate whether a tree is a marker tree and how to contact the Texas Historic Tree Coalition if the evidence warrants a further look. Houser says that countless marker trees may have already been lost as trees age and die, pests, wildfires and storms take them down, or bulldozers clear land that’s under development.

“I'm hoping that someday we'll have found everything that we think might be a marker tree but that's going to be ongoing for a while,” Houser says. “It is a race to find as many as we can before they're gone.”

Comanche Marker Trees of Texas is available in paperback from Barnes and Noble and Texas A&M University Press. Houser says he will donate the profits from the book to the Comanche Nation and to the Texas Historic Tree Coalition.

Mr. Hinsley is a writer, video producer and sustainable farmer who lives in Waxahachie. He's written for Culture Map Dallas, Edible Dallas & Fort Worth magazine and a variety of corporate clients. On his organic farm south of Waxahachie, Hinsley specializes in growing organic specialty melons. Contact him at Marshall.Hinsley@gmail.com.