For one of the oldest celebrated trees in North Texas, neighbors are about to say goodbye to something that has meant so much to so many. 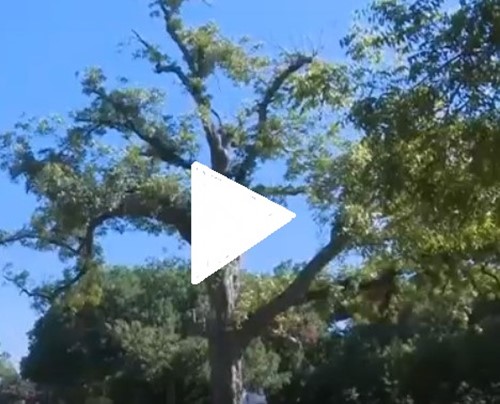 DALLAS — Have you ever known a tree to be more than branches and leaves?

For one of the oldest celebrated trees in North Texas, neighbors are about to say goodbye to something that has meant so much to so many.

The famous pecan tree located on Armstrong Parkway near Preston Road has been around for more than 150 years. Since 1927, neighbors in the area have been lighting it during the Christmas season.

Betsy Weaver knows this tradition well as a Highland Park native. She said when she was a little girl, her mom would bring her out to the tree in hopes she would love it as much as her.

"We called it the big tree," Weaver said. "As December started, we would always say to her, 'When are they going to light the big tree?'"

The tree remained lit holiday season after holiday season. As a Dallas arborist, Steve Houser loved to see a tree get attention from its community.

"It's probably the only event and holiday that has a tree as something that's associated with the holiday," Houser said. "It's watched this area grow."

As the area has grown, so has the beloved tree many have gotten to know so well. Tree limbs have started to fall, and it is no longer safe to walk or drive under.

On Monday, the city is going to remove cabling holding up the pecan tree, eventually taking the entire tree down. Highland Park mayor Margo Goodwin said this wasn't an easy decision to make.

"There isn't anybody around who doesn't know the tree or remember a time when we didn't have that tree," Goodwin said. "Mother nature knows when it's time, and that tree recognizes that it can no longer support that huge canopy."

Goodwin said decades ago, someone did plant part of this pecan tree directly next to it. That has been growing and will now become the new pecan tree in the area.

"We have no reason to believe that the sister tree won't do the same thing, so we'll have new traditions with a new tree," Goodwin said.

A link to the video of the news report will be added as soon as it is made available. Thank you!