City Plants New Trees After Furor: Growth Was Cut Down by Mistake at Skillman

Since Dallas mistakenly removed a growth of trees in December on vacant land at Northwest Highway and Skillman Road, the city is replanting a

The Dallas street crew that mistakenly moved down trees in December on vacant land at Northwest Highway and Skillman Road began replanting a new forest there Tuesday.

Mr. Brugha, a city street sweeper for more than 20 years, said he received his promotion to supervisor shortly before one of his first major - albeit, wrong - decisions. He said that the letter of reprimand he got after the episode doesn't compare with the beating he's given himself.

"You feel really bad," he said, shyly. "We're trying to do right and replace them."

Annette Acuff, a district manager for Dallas tree services, said about 80 indigenous Texas trees that can withstand drought and flower with color would be planted by Wednesday. The city paid a local nursery $6,500 for bur oak, cedar elm, Mexican plum, Chinese pistachio, and native Texas pecan. Wildflower seeds will be sowed among the trees.

"I think this is going to be even better than before," said Ms. Acuff, who supervised the work Tuesday morning. "We're making lemonade out of a big fat lemon. As long as I am the district manager, this will never happen again."

The innocuous triangle of land where Tuesday's reforesting project was underway is bounded on three sides by major thoroughfares, where up to 50,000 motorists a day barrel past at 50 mph.

Just before Christmas, Mr. Brugha's work crew was cleaning trash and brush from the area - state land maintained by the city under a special agreement. Maintenance of the lands was pared back to perimeter mowing during the budget-cutting 1980s, and trees were allowed to grow wild in the middle.

But a well-intentioned Mr. Brugha noticed that the stands of willow and other assorted trees, the eldest being 15 years old and 25 feet high, were collecting lots of unsightly garbage. He ordered them all cut-down, including some bois d'arc trees protected under city ordinance.

"He thought he was doing right," Ms. Acuff said.

Other nearby stands also were on the chopping block until neighborhood conservationist Tom Kemper, who owns a business selling recycled products, intervened. He and several other preservationists complained that the public had lost a treasure that attracted birds in a bleak urban landscape.

On Tuesday, Mr. Kemper said he felt some justice was being done but not enough. 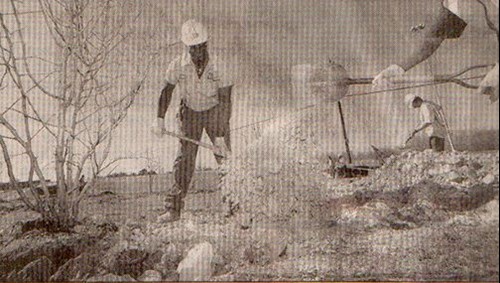 Dallas city worker William Mathis plants a redbud tree in the island at Northwest Highway and Skillman Road, where many trees were mistakenly chopped down in December. Photo by Karen Stallwood with The Dallas Morning News.

"There's going to be biodiversity of trees there," he said. "But I think there's probably not nearly as many trees...as they took down. I'll be satisfied when they implement a new policy so they don't have a supervisor tell them to cut down trees because they're collecting too much trash."

Mike Sultan, a city arborist overseeing the project, said the species of trees being planted were chosen for their hardiness, diversity, and aesthetics.

"These are all good species, native to the area, that will grow best," he said. "We wanted to have a good mix."

This article is a follow-up to The Dallas Morning News article published January 9, 1999, entitled "Dallas Crew Mistakenly Cuts Down Roadside Stand of About 250 Trees."

Mr. Bensman is a staff writer of The Dallas Morning News.