A preservationist says the leveled stand of trees at the corner of Northwest Highway and Skillman Street had included ash, red bud, cedar, bois d'arc and mulberry. Photo by Joe Stefanchik with The Dallas Morning News.

If a tiny forest falls in the middle of a city, is anyone there to hear the noise?

Yes, at least in this case - after a preservationist complained that Dallas street department workers cut down a roadside stand of about 250 small-to-medium-size trees. 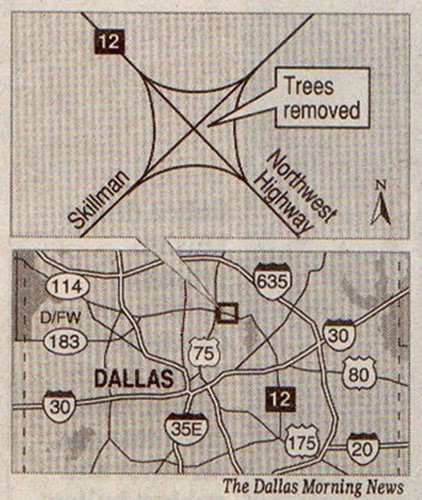 "They took out trees that shouldn't have been cut down. We intend to make it right."

Their stumps, mostly 1 to 4 inches in diameter, protrude the same distance from the ground. The trees were all "volunteers," planted by nature and growing wild. The oldest among them had been growing for about 15 years. A few were close to a foot across.

Mr. Wood blamed an inexperienced median-mowing supervisor for ordering the stand leveled in a mistaken attempt to keep trash from collecting around it.

Instead, Mr. Wood said, only the underbrush should have been cut, leaving even most of the small trees.

A city arborist said some of the trees were big enough - 8 inches in diameter for most species and some as tall as 25 feet - to have been protected by city ordinance. Mr. Wood said probably 20 or more trees will be replanted at the site, at a cost of at least $9,000.

But preservationists said the destroyed trees were worth much more.

Tom Kemper, the citizen complainant, trod what he considered a graveyard Friday afternoon, taking pictures of the stumps.

"It's sad," he said. "We trash everything. Trees are an inconvenience, so get rid of them. The mentality is just amazing.

"This was one of the first places you'd see red buds blooming in the spring when everything else is a parking lot, asphalted, concreted-over environment. This was a pretty little island of trees."

They included ash, red bud, cedar, bois d'arc, and mulberry and stood on a hillside east of Skillman, most noticeable to cars traveling west on Northwest Highway.

Most of the intersection's passers-by - in 50,000 vehicles a day, by official count - won't perceive that the broad median below Don Carter's bowling alley has become an unbroken expanse. And the sawed-off versions aren't visible at 50 mph.

To many people, in fact, the stake of trees might have been seen as so much scrub.

But Mr. Kemper, active in environmental causes and owner of a business selling recycled products, was eager to expound on what had been lost.

"Now this is one less place for migrating birds to land. They're not going to land on Target's rooftop or the Men's Warehouse," he said, gesturing to nearby buildings. "We don't even think anymore, at a time when we have 40 ozone alerts a year."

Mr. Kemper and Steve Houser, a Dallas Historic Tree Coalition arborist whom he notified, said trees are regularly - and illegally - destroyed on city and private property.

"This appears to be senseless," Mr. Houser said, measuring the stumps noting their type. "A lot of times the city will say, "That's a junk tree.' But every tree produces oxygen, absorbs carbon and does all the wonderful things trees do...like reducing storm runoff.

One tree, an Eastern red cedar 10 inches in diameter, was worth $2,000 and could easily have been transplanted, he said.

"We come out after everything's been cut down," Mr. Houser said. "We'd like to see the city talk with neighbors before they come out and take out trees. It's not too much to ask."

Mr. Kemper's chance sighting of the work crew Wednesday apparently saved other trees at the intersections, some still bearing memories of fall glory.

"I think they were going to clean that entire intersection; I don't know to what extent," said a conciliatory Mr. Wood, who added that the supervisor would be disciplined.

"We're going to make sure all our supervisors know that we don't needlessly take down trees. It might be a good idea to have some of the people from the tree coalition talk to our work crews."

Mr. Wrolstad is a staff writer of The Dallas Morning News.