Invasive Beetles On Way to Dallas: Emerald Ash Borers Could Be Latest Threat to Trinity Forest

Steve Houser, a certified arborist, looks up at an ash tree at Reverchon Park in Dallas on Wednesday, Jan. 6, 2021. Houser is calling attention to the Emerald Ash Borer, which kills ash trees and was recently confirmed in Fort Worth and Denton. Research shows it could soon be in Dallas. Photo courtesy of Juan Figueroa / Dallas Morning News Staff Photographer.

A dreaded beetle, the Emerald Ash Borer, has been found in North Texas, and it’s only a matter of time before it’s detected in Dallas, according to experts.

For decades, Steve Houser could be counted on as the guy who railed against cutting down trees. If anyone could be described as a “tree hugger,” it was Houser, a Dallas-area certified arborist for over 40 years and board member of the Trinity Coalition, a Dallas-based nature-oriented nonprofit.

A dreaded beetle, the Emerald Ash Borer, has been found in North Texas, and it’s only a matter of time, maybe even months, before it’s detected in Dallas, Houser said. The insect, no bigger than a dime, has already destroyed hundreds of thousands of ash trees in the United States since first spotted in Michigan 18 years ago.

In Dallas, the beetle has the potential to cause heavy damage to the Great Trinity Forest, considered the largest urban bottomland hardwood forest in America and nearly six times the size of White Rock Lake. About 40% of the Trinity Forest’s trees are ash and therefore vulnerable to the beetle, according to studies.

Native to Asia, the emerald ash borer, or EAB, was unknown in the United States until 2002, when it was detected in southeast Michigan. The invasive species has since spread to 35 states.

In 2016, the insect was first discovered in Texas near Caddo Lake in Harrison County and then spread to adjacent counties in East Texas. In 2018, the insect was detected near Eagle Mountain Lake, 150 miles away.

Most likely, the EAB beetles found in Tarrant County did not come from East Texas. The insects, which can travel up to 12 miles a year, couldn’t have moved that fast, said Mike Sills, urban forestry expert with the Texas A&M Forest Service. Sills believes it’s more likely the beetles were brought to the area with freshly cut firewood or lumber from states up north.

Since 2012, the Texas forest service has been watching out for EAB in Texas, deploying traps to detect the pest. Since their first discovery in Harrison County almost five years ago, the forest service has found more EAB beetles in Cass, Marion and Bowie counties in East Texas, as well as Denton County in North Texas.

The traps are set up in late winter and early spring when the insect is most active. “We’ve been monitoring the situation here,” Sills said. “It hasn’t been found in Dallas yet.”

Adult EAB beetles lay their larvae in the bark of the ash trees. The larvae then feed under the bark. “They’ll starve the tree by not letting water up and food down to the roots,” Sills said.

Once infested, the beetles will kill an ash tree within two to three years, according to a Texas Forest Service fact sheet.

Homeowners who want to save their ash trees should discuss their options with a certified arborist and weigh the costs of preventive treatments versus removal, Sills said. There are insecticides that can be applied before the beetle is detected in a community.

“We don’t recommend treating trees unless within 15 miles of an active sighting,” Sills said.

While homeowners can save individual trees, the challenge facing Dallas, which owns the Trinity Forest, is much different.

The urban forest follows the Trinity River for about 11 miles from the Santa Fe Trestle Trail near Corinth Street and Riverfront Boulevard on the southeast edge of downtown Dallas to just past Interstate 20. 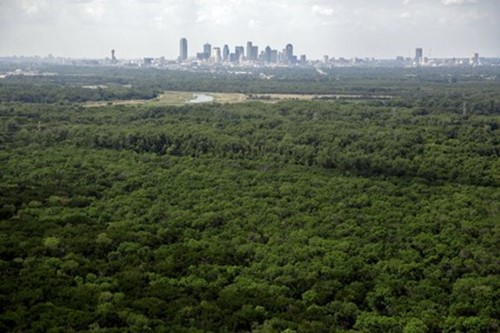 The Great Trinity Forest as it looked from the sky in 2013. Photo courtesy of G.J. McCarthy / Staff photographer for the Dallas Morning News.

On Feb. 1, the city’s Environment and Sustainability Committee will hold a briefing on the threat of the emerald ash borer.

One of the issues is to figure out how many ash trees are in the city.

“That honestly is one of the big challenges,” said Bret Johnson, a certified arborist for the city of Dallas.

Estimates that 40 percent of the Trinity Forest are ash trees are based on studies previously done. But that doesn’t account for elsewhere in the city -- including parks, Johnson said.

Council member Chad West, vice chair of the committee, sees the need for a management plan to address the threat.

West sees three options facing the city. The first is to do nothing and allow a huge swath of the forest to die within about three years of infestation.

But Johnson and other tree experts said thousands of fallen trees would pose a huge fire threat. A lightning strike or human carelessness could spark a wildfire.

A forest fire could pose a health threat to densely populated areas nearby in South Dallas, downtown and Oak Cliff.

“If we had a fire in the Trinity Forest, especially in summertime, all that smoke’s going through downtown Dallas,” Houser said. “At that point people are going to be really hot about it and ask why didn’t somebody tell us about this and why didn’t somebody do anything about it.”

Using pesticides on a grand scale to save the trees would be both cost-prohibitive and environmentally questionable. “If you’re talking about thousands of trees, it’s just not realistic or feasible to treat them with an insecticide,” Houser said. 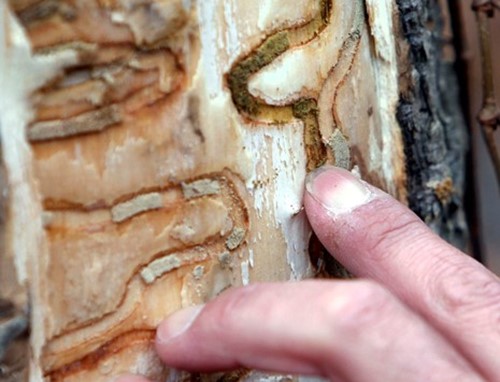 In this Oct. 26, 2011 file photo, the markings left from Emerald Ash Borer larvae on an Ash tree are pointed out in Saugerties, NY. The Emerald Ash Borer, first found in 2002 in Michigan, is now in 30 states and has killed hundreds of millions of Ash trees. Forests from New England to the West Coast are jeopardized by invasive pests that defoliate and kill trees. Scientists said the pests are driving some tree species toward extinction and causing billions of dollars a year in damage. Photo courtesy of Mr. Mike Groll.

The only sensible option, West and Houser said, would be to do a selective cutting of the ash trees. That would allow the lumber to be sold to help fund replanting of new trees, Houser said. Decaying trees also release more carbon, which adds to air pollution, Houser said.

“There’s no magic wand solution,” West said. “We have to look at the path of least destruction.”

The priority is to come up with a plan of action while there’s still time, he said. City staff will be looking at how other cities have handled the infestation.

“We’re not the first to invent the wheel here,” he said.

The city needs to get educated on the issue fast so action can be taken, Houser said, conveying a sense of urgency.

“It’s a devastating pest,” he said. “That’s why I’m pushing for a management plan.”

Mr. Tarrant is an enterprise writer at The Dallas Morning News. Telling stories about ordinary people involved in extraordinary events is his passion.